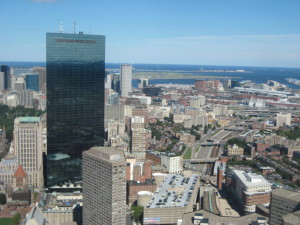 The kids and I took this from atop the Prudential building on a beautiful summer day.

We were trying to pretend the world wasn’t in chaos. My neighbor Lynn and I sat on deck chairs, watching our kids play in my driveway, while we listened to the radio for news about the terrorist attack on the World Trade Center, just 30 miles away. The next day, she’d discover that her cousin, a Staten Island firefighter, had died in the buildings. A neighbor from down the street never made it off the 100th floor.

I contemplated telling my sons, then three and four, that a carelessly dropped cigarette had burned down the buildings. But then I realized I would be setting them up for delusional fears over burning cigarettes. (i.e. “That smoker will burn down the airport!”)

Also, it would be a lie. And as much as I didn’t want to tell them the truth — that we were attacked on our home turf — a lie would compromise their trust in me. And that was more frightening to me than the fighter jets that flew over our house in the aftermath of the attacks.

When I came back outside from using the bathroom, Nick, then 4, met me at the door.

He had heard “terrorist attack” and “World Trade Center” on the radio, set low by my deck chair, and translated it into preschoolerese. He knew the truth, and so I did my best to be truthful and yet, age appropriate, if there is such a thing when it comes to terrorism.

Now that my sons are 16 and 14, I haven’t shielded them from the news of the Boston Marathon attacks, not that I could if I wanted to. They are teenagers, and teenagers talk, text, and share news. Like their father, they are runners; we watched their dad and a friend run the Boston Marathon a decade ago, staying in a hotel not far from the finish line. What’s more, they know that this attack on Boston, where I went to college, has made me sad and mad all week long. It feels like my hometown was hit, New York’s little sister.

My sons are now too old for the “look for the helpers” speech, á la Mr. Rogers, but certainly old enough for Stephen Colbert’s eloquent and funny assessment:

Having ancestors who were pilgrims (and therefore, buckled their hats to their “goddamn” heads), and having been to Boston several times with me and my college buddies, well, this resonated with both of them.

Since Monday (and since 9/11), there have been plenty of suggestions on how to talk about such horrible events with your kids, such as this sounds piece by Dr. Gwenn O’Keefe of Pediatrics Now and the Boston area. But I’d like to add how NOT to tell your kids of all ages about the Boston tragedy, because chances are, we parents have learned to do things not quite right in times like these: