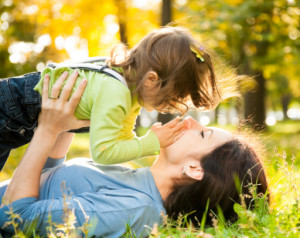 If you’re anti-corporal punishment (or shouting), but your spouse isn’t, your loving attention can help mitigate the painful effects of harsh discipline on your kids, reports a new study published in Parenting: Science and Practice.

Researchers at the Albert Einstein College of Medicine in New York found that a loving mother can help protect a child from “externalizing problems” caused by harsh discipline. Says Science Daily:

“This would suggest that, as long as the child knows they’re loved, and feels that it is coming from a good place, their experiences of being strictly disciplined is unlikely to result in antisocial behavior further down the line.”

The study included a group of Mexican-American adolescents, because, reports Science Daily, the Latino cultural norms tend toward using harsh and restrictive discipline for children. But other cultures tend to advocate spanking as well.

In a 2009 BabyCenter survey of 1,300 mothers, nearly half spank their children. This despite studies that have shown that spanking breeds aggression in children. As Time reported in 2010:

“The reason for this may be that spanking sets up a loop of bad behavior.  Corporal punishment instills fear rather than understanding. Even if children  stop tantrums when spanked, that doesn’t mean they get why they shouldn’t have  been acting up in the first place. What’s more, spanking sets a bad example,  teaching children that aggressive behavior “is a solution to their parents’  problems.”

In other words, discipline, don’t punish. And then offer a hug.

Posted in All in the family, In the News | Tagged discipline, spaking, study | Leave a response