Here’s a MommaSaid classic involving fire trucks, soccer carpool, and a pain in the base of my cranium: 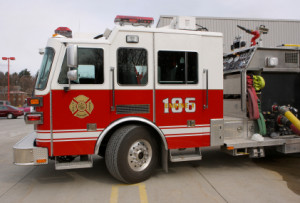 At least my house wasn’t on fire. My neighbor’s house wasn’t on fire, either, but that didn’t stop the fire department from bringing out the big trucks for what turned out to be an overworked motor on the house vacuuming system. As they pulled up in front of my house around three yesterday afternoon, I thought what every busy mother would think: Please don’t block my driveway.

I had to get to school to pick up four fifth graders and take them to indoor soccer practice, all the way listening to them trash talk about FIFA soccer like British pub dwellers, minus the accents and the Guinness stout. But I was already running late, because everybody had decided to call me at the very same time.

First, it was a source for a magazine article whom I’d been trying to get a hold of that afternoon. I quickly gave up the idea of swinging by the post office before heading to school, and did the interview right then and there.

Next, it was the frazzled mother of one of the kids on the soccer team who’d forgotten that her son had a Monday afternoon commitment and therefore couldn’t join winter training anyhow so she told me, the coach. Even though we’d all divided the cost of the field and the trainer by the number of kids. Even though no other kids were interested in joining Monday afternoon soccer.

Meanwhile, someone was frantically calling my cell phone and then my home phone and then back again. It was my neighbor, calling about the fire that turned out not to be a fire. I peeked outside to see the fire trucks pulling up. “Yep. The fire department is at your house alright,” I told him. Then I started to get a small pain at the base of my cranium.

I went back to my computer to download directions to the post office nearest the soccer dome, pasted them onto the calendar of my PDA, and hoped that my next phone has GPS. The phone I plan to get any day now. Any day. [This was just 4 years ago!]

I dashed out the door with the packages I should have sent out Saturday, and realized that the back seats to my mini-van were tucked away underneath a box left over from Christmas — my son’s soccer backstop. A heavy backstop in a very long box.

The garage door was broken, so I pulled it open, backed out my car, opened up the hatch, pulled out the box, lugged it across the ice and snow and dropped in in my garage, and then pulled the garage door back down. Then I yanked the back seats up and out of the van’s seat compartment, standing on the bumper for leverage. Also, to prevent from throwing out my back and landing face down on the ice on the driveway (though at least I’d get quick medical attention, what with all those fire trucks.) Then I hopped into my car just as a fire engine pulled up and slowed down — right in front of my driveway.

And it was that moment, the moment I was watching the big red truck braking near my mailbox, that I thought Please don’t block my driveway. Because, you see, I had a carpool to pick up and packages to mail and very questionable directions to the post office in a town I rarely go to. (Since when is “Turn left toward McKelvey Street a reasonable direction? If I don’t know where McKelvey Street is, how can I turn toward it? Thank you, Gulf Station man, for the better directions.) I had checks to collect from soccer players’ parents and text messages to return (after driving, of course) and an argument over Manchester United vs. Chelsea to weigh in on.

I had things to do, places to go and a fire truck about to park at the entrance to my driveway. I held my breath…and lucked out. The fire truck moved down the street a ways, and the police arrived to direct traffic on what must have been an otherwise boring day for the lot of them, or else why would so many people show up for a smoking vacuum motor?

I started my car and realized just how laughable my New Year’s resolution to “take things easier” had become just four days into January.

Amazingly, I actually managed to get to school with minutes to spare. When I walked into the cafeteria to pick up the kids, it was eerily quiet. A little kid asked her mother, “Why’s nobody here?” Her mother replied, “This is what early looks like. Take a good look.”

Posted in Days Like This, MommaSaid Classic | Tagged carp[ools, work from home | 1 Response