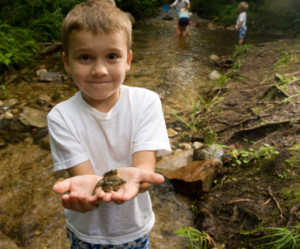 This is not an African dwarf frog, but I bet it’s still giving you the willies.

Do your kids like to play with raw meat? Because if they have a pet aquatic African dwarf frog, the result could be the same: Salmonella poisoning. An investigation published in Pediatrics this week found that the source of a nationwide pediatric Salmonella outbreak among 376 people were pet frogs — specifically the African dwarf frog, just $3.49 each at PetSmart! (Not sold online. Ummm. I should hope not.)

According to the report, the median patient age was 5 years-old, with most under age 10. Among the 114 patients interviewed, 61% reported “frog exposure.” (When you see “frog” and “exposure” together, does your mind conjure up an image of a naughty frog in a bathrobe, too?)

The report says that this is the first known nationwide outbreak of Salmonella infections caused by pet amphibians. Generally, turtles have been the culprits. All of which makes me glad I have a cat.

The Centers for Disease Control and Prevention warns parents to keep such pets away from young children, at home or in schools and daycare centers. But what if you already have one (or a dozen)? These frogs can live as long as 18 years. Find a neighbor with older kids (or no kids) who might like a frog, ask the pet store about their return policy, or, since this is the 21st century, check out eBay.

According to the CDC, the signs and symptoms of Salmonella include:

Sounds like the stomach flu, no? I wondered how you can tell the difference and found this at KSFY, Sioux Falls’ news leader: http://www.ksfy.com/story/12554159/avera-medical-minute-salmonella-vs-stomach-flu

Meanwhile, perhaps a fish instead?