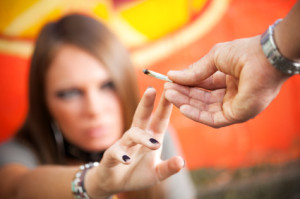 A new study published in the journal Human Communication Research suggests that refraining from disclosing past drug use to your kids makes them respond better to antidrug messages. Reports ABC:

[Researchers at the University of Illinois at Urgana-Champaign] “found that children were less likely to think drugs were bad if their parents opened up with them about past substance use to teach a lesson.  Children whose parents told them to avoid drugs were more likely to avoid them.”

In other words, tell them you didn’t inhale and maybe they won’t either.

The Partnership for a Drug-Free America disagrees with this approach, instead advising parents to be honest, be specific, be an example, and be convincing. In “A Parent’s Guide to the Teenage Brain,” they warn that lying about your past-drug use could make you lose credibility “big time,” if your teen ever finds out the truth.

Credibility isn’t the only thing you’ll lose. How about trust and respect? That lie will fester in your relationship, causing a schism between you unless you come clean about both the drugs and the lie. In fact, the lie is worse than that joint (or joints) you definitely inhaled back in the day.

Should you sit down at dinner tonight and share the sordid details of your sophomore spring break? Hell, no. But if your teen ever asks, well, be honest, be specific, be an example and be convincing. But don’t be a liar, no matter what the latest study shows.