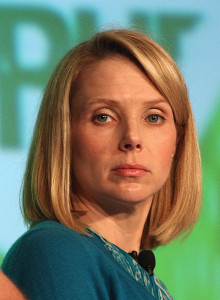 Photo by Paul Zimmerman/Getty Images for TechCrunch/AOL via WikiCommons

Marissa Mayer wants you to get back to the office. If you work for Yahoo!, the company’s new (mom and) CEO has announced that she’s ending telecommuting at the tech giant.So far, the media and bloggers have jumped on the fact that she’s a young new mom who, says the Los Angeles Times, “built a nursery next to her office at her own expense to be closer to her infant son and work even longer hours.” The general consensus is that Mayer has let down her fellow moms by killing workplace flexibility.

As though moms of young children are the only ones who benefit from telecommuting. Not.

Working from home (or anywhere besides the office) isn’t a mom issue. It’s a 21st century issue. And Yahoo! is a tech company, a “digital media company that delivers personalized content and experiences worldwide,” that has now chosen to work like it’s 1999, even though modern technology makes it possible for us to work just about anywhere.

Mayer claims that working from home kills innovation, which can be cultivated by “being together.” And yet, “being together” can now be easily done by Skype, on your tablet, from Starbucks or your dining room table. Or, say, from the nursery you’ve built next to your office. Ahem.

While young moms who work at Yahoo! may take the hardest hit from this new (backwards) edict, everyone at the company who has learned how to work anywhere and anytime an innovation strikes will feel the pain.

Hopefully, she’ll eliminate her new Yahoo! anti-telecommuting rule once she sheds the dead weight without layoffs. Then she can work on getting rid of that annoying exclamation point in Yahoo!.

One response to “CEO/Mom Mayer Kills Telecommuting at Yahoo!”