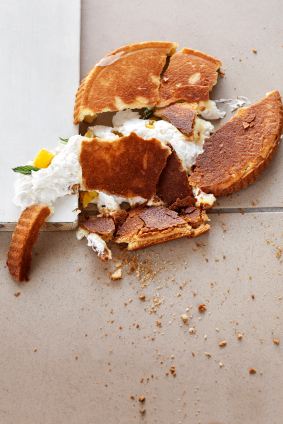 The first time I saw “Cake Boss,” I fell in love with its Jersey sensibilities. When Carlo’s Bakery’s owner and TLC star baker Buddy Valastro rolled out a wedding cake to cheers and praise, he announced in an aside, “It’s like I was frickin’ Bon Jovi or somethin’!”

“Oh yeah,” I told my kids. “We are so watching this show.” This Jersey girl felt like ET: “Hooooome.”

We’ve been Tivoing the show ever since, and then we got hooked on its spin-off, “The Next Great Baker.” Hooked, until last night.

My kids and I were both bothered that Gretel-Ann’s cheating, including turning up her competitors’ ovens to ruin their goodies, were treated with a wink by the show’s producers. So when she made it into the finale, we were rooting against her, especially when she defended her actions with “Being selfish is not always a bad thing….I had to do what I had to do.”

So we were behind Team Ashley, because she made a way better cake (with correct spelling, too), and she never cheated. But then her nemesis, Paul, who was voted off the sheetcake last week, prodded the angry beast.

“How does a 25-year-old kid have the life experience to become the Next Great Baker?” he asked her.

Oh no you didn’t! Yes, he did, largely because the two had gone at it in previous shows, when tempers were flaring and everyone was covered in flour.

Here in the finale in front of God and everyone, however, Ashley should have said, “The same way I had the experience to beat you to this spot on the grand finale stage — with talent and drive.”

Instead, she laid into him with a profanity-laced tirade that made me want to cover Momma Valastro’s ears. Or at least close her mouth, which dropped with the first bleep.

Finally, somebody went on to say what should have been said. Head baker Joey admitted that her outburst concerned him, asking Ashley, “You took a chance blowing $100,000 just to tell him what you thought about him? Was it worth it?”

And she said yes. Also,  “I might have a bad mouth sometimes… but I’m not ashamed of who I am. I don’t regret a single thing.”

Fabulous. Our choices for the Next Great Baker are the Potty Mouth vs. the Cheater. Their fellow contestants voted for Ashley, having been burned by Gretel-Ann’s cheating. Buddy’s co-workers, who will be working with the contest’s winner for a year, chose Gretel-Ann, no doubt envisioning a year of outbursts from Ashley.

And the winner is? Ashley, because when it comes down to it, she makes a nice cake.

As for my kids and I and these baking shows, well, we’re full, thanks. No more.

3 responses to “The Next Great Baker: Potty Mouth vs. Cheater”