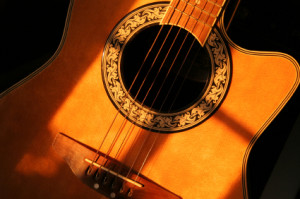 The “whys” don’t matter much to me. My friend’s 21-year-old son has passed away, and our community is left with grief and sadness.

At his wake yesterday, his guitar was propped up against a table where a laptop was projecting photos of this way-too-young-to-die young man set to moving music. A crowd of high school and college kids watched in near silence, with just the sound of muffled sobs emerging now and then.

My son, friends with this boy’s younger brother, and I got in the long line to pay our respects, watching the boy’s parents and his siblings stoically receive each visitor with a hug and thanks, almost like they were consoling us. We hugged his mom, then his dad, and then his two younger brothers, and they all thanked us for coming, as though there could have possibly been anywhere more important to be yesterday.

It felt like the family was being supported by a giant community hug, as though we were all trying to relieve their pain and grief. And yet, they also seemed so alone. How could we know what it’s like to lose a child and a brother so very early in life?

My friend’s Facebook status updates are heartbreaking, especially the photos of her with her newborn first child from 21 years ago. But there’s something else, too. She writes about needing to learn to live without her son after the funeral, and she gives up to God the rest, a true testament to her faith at a mother’s most difficult, devastating moment.

When my son and I finished paying our respects, we met up and, tears in our eyes, hugged each other. We wiped our tears and walked to the car, where we decided that what we needed was hot chocolate.

On the way to the store, I asked him what he and his friend were doing with the shop vac when I found them looking guilty in the basement the other day.

“We were seeing if it would shoot confetti,” he admitted.

“Oh yeah! All over the room,” he laughed, and I laughed too, grateful to be able to be with my son on this, the saddest of days.

And with that, life goes on.