I wielded a loaded gun not 10 feet from Tucker Carlson, and yet no one stopped me.

I was appearing on Sunday’s Fox & Friends to talk about the six year-old boy who was suspended from school for pointing his finger like a gun at a classmate. You know, like we used to do when we played Cops & Robbers on the school playground.

At one point during the interview (which I’d love to embed, but WordPress is just not having it today), I demonstrated how my son and his kindergarten friends had wielded their own finger guns one day in class. Only, I just found out about that, some 10 years later. No one got suspended for playing like kids play. The teacher told them to stop, and they did.

We talked about all that on Fox yesterday, but what we didn’t have time to mention were these points:

Tucker Carlson didn’t seem worried that I was waving around my finger gun, and I made it past the Fox News headquarters’ security guards and into the awaiting limo, which I commandeered through a Starbucks’ drive-through just for grins. 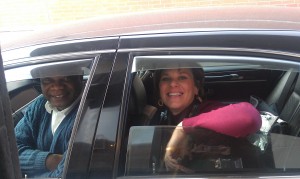 What say you? Did the time fit the crime for this boy?

One response to “First Grader Suspended for Wielding “Finger Gun””