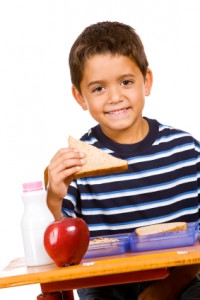 One of the most important lessons I learned while I had cancer was that my kids could make their own lunches in the morning. I know, it’s not exactly the kind of chemo-induced revelation that fills a teary cancer memoir, but it was the beginning of a new realization for me:

My children had hands. They knew how to use them to put cheese and cold cuts between two pieces of bread. They knew how to pour some pretzels into a plastic baggie. They could put it all into a lunch bag with a bottle of water. Who knew?

I didn’t, because until I was diagnosed with non-Hodgkin’s lymphoma, I made their school lunches. The poor dears were in second and third grades, and Mommy worked from home and therefore didn’t have to dash out the door in the morning. Here, let me do that for you.

But then came chemo, and about a month in the hospital, followed by a summer of letting the kids get carted around by other people. Then chemo ended, and school started — and so did my daily radiation treatments. I was exhausted and bald and writing a book in my “spare time,” and so, the kids made their own lunches. I was playing time triage, saving my energy for the things I absolutely had to do, because by 1:30 p.m. every day, I was too tired for much of anything.

Yet, when the radiation ended and the good news came — remission — I didn’t take back the job of making the kids’ lunches. In part, because I was still so stinkin’ tired, but also because, well, see above: hands and bread. Sure, sometimes Dad made lunch and sometimes I slipped the kids a few bucks to buy a school lunch. Most mostly, blessedly, they’ve made their own lunches ever since.

Now that they’re teenagers, letting them make their own lunches doesn’t feel quite as much the big deal as it did five years ago. After all, one of my kids will soon learn how to drive a car, so lunch-making should be a piece of cake, so to speak. And yet, it took cancer for me to realize that.

So, my New Year’s resolution this year is more of the same, more of expecting more and more from the kids, and less and less from Mom. Though I no longer have cancer (five years clear!), I will still use time triage, and the kids will still use their hands. After all, I’m raising them to leave me, even if I plan to be around for a long, long time.

Will you do the same? Don’t put yourself last all the time!

Posted in All in the family, Days Like This, Momma Said, School Days | Tagged chores, new year's resolution | 3 Responses