REEL LIFE WITH JANE: The Hobbit: An Unexpected Journey 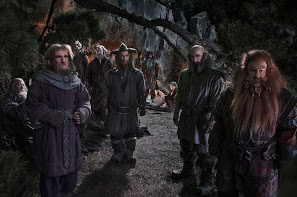 MOVIE SYNOPSIS: Based on the book by J.R.R. Tolkien, this movie finds a curious Hobbit named Bilbo Baggins journeying to the Lonely Mountain with a raucous group of Dwarves to reclaim their homeland and a lost treasure stolen from them by the dragon Smaug.

Violence/Gore: While less violent than the Lord of the Rings trilogy, there’s still a high body count and a few battle scenes. A dwarf king is decapitated, and an orc leader’s arm is amputated. The main characters are chased and/or in peril throughout the movie, usually from orcs and their beasts, which are bloodthirsty and frightening to look at. One scene finds them trapped in a tree hanging off a cliff. Large trolls steal the dwarves’ ponies to eat, and then start to “cook” the dwarves over a fire. It appears that one of the main characters has died at one point.

Which Kids Will Like It? Kids 12 and older who love the Lord of the Rings trilogy, or stories filled with fantasy characters.

Will Parents Like It? The Hobbit is a wonderful story and a great addition to the Lord of the Rings films.

MOVIE REVIEW: What a joy to see our old friends from the Lord of the Rings trilogy again, and hear that familiar music from those earlier films. This movie — the first in a trilogy — is a beautiful blend of old and new. Well, new to the big screen. Familiar if you’ve read The Hobbit by J.R.R. Tolkien.

If you wondered how they would bring in Frodo (Elijah Wood), the main character in the Lord of the Rings trilogy who wasn’t alive when this story took place, here’s how: This story begins with eleventy-one-year-old Bilbo Baggins (Ian Holm reprising his role from LOTR) narrating the tale of how he ended up in the company of a raucous group of dwarves on a dangerous journey across Middle Earth.

Sixty years prior, the humble and much younger Bilbo (Martin Freeman) receives a strange visit from the wizard Gandalf the Grey (Ian McKellen). Shortly thereafter, 13 dwarves show up at his door and proceed to ransack his pantry, eating large amounts of cheese, bread, cakes, meats, fruits and veggies, and drinking whatever’s available.

Bilbo soon learns the reason for their visit. Gandalf has chosen him as a “burglar” to help the dwarves reclaim their homeland — the kingdom of Erebor, which was taken over by Smaug, a frightening dragon that forced the dwarves into exile. One of those dwarves is Thorin Oakenshield, the noble and fearless heir to the Erebor throne.

Their journey takes them across Middle Earth and into the midst of much danger from orcs, trolls and goblins, along with a brief respite in the beautiful elven homeland of Rivendell, where we see the familiar elves Elrond (Hugo Weaving) and Lady of Lorien Galadriel (Cate Blanchett), who offers Gandalf her unconditional support in their quest.

I’m a huge fan of anything Tolkien, so I’m absolutely in love with this movie and can’t wait for the next two (hitting theaters in 2013 and 2014). But even if you know nothing about the story, this is still a great movie with dazzling special effects, thoughtful characters, an engaging story and a beautiful soundtrack by Howard Shore. Don’t miss Neil Finn’s haunting “Song of the Lonely Mountain,” which plays over the end credits.

The running time is nearly three hours, but I honestly didn’t feel like it was too long, because the story moves along and the pacing is fine. Peter Jackson also did a good job of mixing thrilling action sequences and quiet moments, so the movie neither races along at break-neck speed or slows to a grinding halt.

Along with the dwarves, we meet some new characters, like Radagast (Sylvester McCoy), a wizard with strong bonds to the land and its creatures; Azog, an Orc chieftain (who resembles a buff Voldemort and sounds like Jabba the Hutt); and briefly, the Necromancer (Benedict Cumberbatch), a magician with a strong connection to the dead.

It’s fun to get a bit of the Tolkien backstory and learn more about the ancestry, heritage and honor of the characters, both new and old. All in all, a fantastic film.

I don’t generally recommend seeing movies in 3D, but will make an exception for The Hobbit, which was actually filmed in 3D, meaning that great care was taken with the filming. Much ado was made about the 48 frames per second rate, but you probably won’t notice it unless you’re a dedicated filmmaking aficionado.