One Direction with a Poster of a Teenage Boy 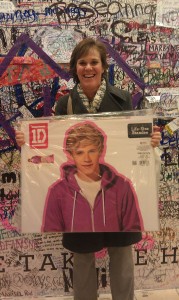 I am going to send him a life-sized cutout of me for Christmas, but he probably has people to carry it for him.

I suppose I still felt a little guilty for newspapering her into her dorm room. So when my friend, who cannot be identified right now because of the sensitive nature of this post, asked me to pick up some Christmas presents for the teenage girls in her life at the One Direction pop-up store in Manhattan, I said yes. She doesn’t live near any of the pop-up stores in cities nationwide, and well, see above: newspapering.At the time, I had a vague idea who One Direction is. I knew they were the latest boy band to make girls ages 10-14 scream and cry. But, since I am the mother of teenage boys, that was about the extent of my knowledge.

So when I got to the store next to Madison Square Garden on Friday afternoon, I was surprised to learn two things:

I was suddenly very glad that I have boys.

I jostled my way around the frazzled mother-thrilled daughter duos and sidled up to a long table covered in a red cloth, like a buffet at Red Lobster. The young salesman asked if he could help me.

“Be gentle. I have sons, and I don’t know what this is all about,” I said.

I held up photos of what I needed to buy, but I didn’t have a picture of my friend’s requested pièce de résistance: a “cutout” of one of the boys in the band.

“I need a cutout of Niall?” I asked, mispronouncing his name “Nee-all,” wholly expecting the clerk to return with photo of an Indian kid. Instead, he brought me a life-sized cutout poster, folded in thirds, of a blond-haired, blue-eyed white boy who looks very much like a few of the kids on the soccer team I coach.

Unlike the “commemorative sack,” a plastic bag with a photo of the band that I purchased for a dollar, there was no bag, nor device to help me schlep this giant Poster of a Teenage Boy around the streets of mid-town Manhattan.

The poster indicated it was 69 inches tall, and I was relieved. My arms are a whopping 23-inches long, a fact I learned from the seamstress who had turned my beaded, short-sleeved wedding gown into a beaded, long-sleeved wedding gown. She measured my arm, told me the number, and then cursed in Italian.

Folded in thirds, the Poster of a Teenage Boy would fit snugly under my arm. I shoved my umbrella in the commemorative bag, grabbed the bag’s handles with my left hand, and tucked the folded cutout of a blond-haired boy in a purple hoodie under my right arm. Then I went out into the streets of New York City, during rush hour, in the middle of the Christmas shopping season, in the drizzly rain.

Near the store, girls pointed and gasped.

“Niall!” they whispered to their moms and friends, pronouncing it “Ny-el.”

But the farther I got away from the One Direction store, the more I felt like I was holding a sign that says, “I am a pedophile. Inquire within.” Also, my right armpit was getting numb, so I ducked into a Starbucks to hide for a while.

A woman around my age pointed at my Poster of a Teenage Boy, which I’d propped up against the mug display.

“Sure,” I replied, rubbing my shoulder. I finished my drink and headed to the holiday party I’d come into the city to attend.

As soon as the elevator opened to the party, I wished I could have stashed my Poster of a Teenage Boy in the lobby. This was a mediation center, where you are required to take off your shoes. I noticed that nobody was looking at their cell phones, which they’d likely turned off and stuffed into their hand-sewn bags from a village in Nepal. The band was playing West African music, and the hors d’oevres had no doubt been sourced at Whole Foods.

I shoved my Poster of a Teenage Boy behind a door, and forgot about him for a few hours.

When it was time to leave, I put on my boots and coat, grabbed my commemorative bag and, reluctantly, retrieved my Poster of a Teenage Boy.

“Should I know him?” one of them asked.

“I don’t even know who he is,” I replied. I hiked to the parking garage, tossed the Poster of a Teenage Boy in the back of my car between the soccer balls and the empty Gatorade bottles, and went home.

On Sunday, I was driving down the highway to do some Christmas shopping, when NPR, of all stations, ran an interview with Harry Stiles and Niall Horan of One Direction. They talked about one of the songs they’d written together, “Little Things,” in which Niall sings to a girl  about how she may not love herself, but he loves her anyhow.

“You’re perfect for meeeee,” he crooned.

I pulled my car over, took off my coat, and draped it over my Poster of Niall Horan. After all, I didn’t want anyone to steal him while I was Christmas shopping.