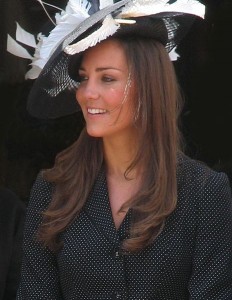 Stephen Colbert, you know I adore you, but this time you went too far. It’s not your fault. I mean, who doesn’t think that “morning sickness” is funny? Well, unless you’ve had morning sickness, of course.Then again, my toddler had the stomach flu the same time I had morning sickness, which resulted in both of us revisting our breakfasts into a plastic toy wagon like we were in a frat house on a Sunday morning. Not funny at the time, but later? Mildly amusing.

But Stephen, you made fun of Kate Middleton’s illness, hyperemis gravidarum, which isn’t your mother’s morning sickness, so to speak. It’s not just nausea, but nausea with severe vomiting, which causes severe dehydration and prevents you from keeping any food down. When it lands you in the hospital like it did for the Duchess, it’s pretty serious.

According to women who have endured hyperemis gravidarum, it’s tortuous. One woman told the Huffington Post, “I wanted to kill myself,” and got through weeks of extreme sickness with help from signs her mother posted around the house that read: “You can do this.”

Worse, people, including doctors, make patients feel like it’s all in their heads. Yet, some patients vomit up to 20 times a day, while some are hospitalized for near starvation. Experts say it lasts on average 17.3 weeks — which means that Kate could be in this until April, if not until the baby’s (or babies) born.

And then there’s the hoopla over a royal baby. In other words, everyone’s watching, and not a few are wondering if she’s a royal wimp. If I had to stand outside the hospital and smile for the cameras ,”slightly wobbly-looking,” after I’d been vomiting for days, I’d want to flip everyone the royal bird. She’s forced to put on a smile and talk about how wonderful the blessed news is when really, she’d like to puke and lie down.

And that ain’t funny.

Posted in Days Like This, In the News | Tagged celebrity pregnancy, morning sickness | Leave a response