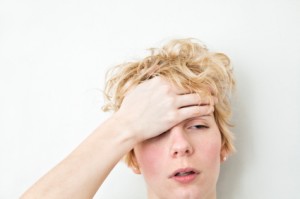 My son and I are fighting the stomach flu today, so I’m posting this classic which ran in GoodHousekeeping.com a few years ago:

I was halfway to my in-laws’ house when it hit me: The  same stomach flu that had struck my fifth grader while visiting his grandparents  this weekend, and then consumed my husband when he went to pick him up. I had another half-hour to drive, and though I’d brought along a bucket, I hoped I wouldn’t need to use it.

I’d been a little nauseous all day, but when I decided to drive to my in-laws’ to retrieve my healthy son on Monday night, I felt pretty okay. Certainly, I felt better than my husband, who was already staking out a spot on  his parents’ couch under a pile of blankets.

So, it seemed like a fabulous idea  for me drive the hour there and the hour back so that my fourth grader wouldn’t  miss school yesterday, as he’d already been out quite a bit with the swine flu. A fabulous idea, until the radio started taunting me.

As the chills set in and my stomach turned, deejays on several radio stations  began playing a series of food-related songs that only served to make me even  more nauseous. First, “Margaritaville,” which brought back bad memories of a  seaside party during my college years. My tummy churned, and I started eyeing  the bucket on my front passenger seat.

I changed the radio station.

I changed the station.

Finally, the lite FM station played Linda Ronstadt’s “It’s So Easy,” which  suited me and my desire to take my mind off the stomach flu — until I started  hearing the refrain differently. Soon, “It’s so easy, so easy” became “I’m so  queasy, so queasy, yeaaah.”

Somehow, I made it to my in-laws’ without revisiting dinner, only to catch  the whiff of what they’d eaten for dinner when I walked into the kitchen. And  then I couldn’t avoid it anymore. I had to go, uh, inspect their plumbing.

When I came out of the bathroom, I felt much better. My husband and my fifth  grader, however, were holed up on adjoining couches in the living room in the  dark. I touched both of their faces; they were burning up.

I took some Emetrol and then 15 minutes later, gulped down some more. My  mother-in-law implored me to stay, and when I nixed that idea, she offered to  drive home whoever could stand the ride. But it was late, and she’d done enough  for us.

There weren’t enough toilets in their house for three bouts of the stomach  flu, and she was out of couches. I reminded her that I’d been much sicker before  and even managed to finish writing a book while undergoing chemotherapy. Surely  I could drive home with a little tummy bug. You know, as long as the radio  didn’t play, “Cheeseburger in Paradise.”

My fourth grader and I piled into my car, and I moved my bucket closer, just  in case. On the way home, we listened to any song I could find that didn’t  involve food. Tunes like “You Give Love a Bad Name” and “I’ll Stop the World  (and Melt with You)” got me two-thirds of the way home, when pangs of nausea started to hit. I tried to put it out of my head, when the radio played Bob  Marley’s “Three Little Birds.” As he promised, “Every little thing gonna be  alright,” I felt a chill. Only, this time it had nothing to do with the flu.

We made it home, and I went straight to bed. I managed not to, er, pray to  the porcelain god, and I slept much of the night. In the morning, my fever was  gone, and my fourth grader made it to school. Later, my husband and my fifth grader came home, where the three of us lay around all day, feeling so queasy,  so queasy. Yeah.

So far, my in-laws haven’t come down with the stomach flu. Maybe every little  thing’s gonna be alright…oh, honey, honey.