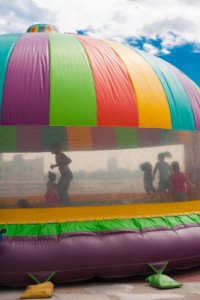 Hey, I have an idea. Let’s put kids of all sizes and weights inside a trampoline-like ride shaped like a castle, and let them jump up and down! Then we’ll have a 20-something kid sit by the door and charge admission.

Let’s face it: If the “bounce house” or “bouncy castle” were proposed today, chances are, it wouldn’t pass current safety standards. But because we adults remember bouncing around in them with our siblings and BFFs back in the day, we poo-poo the idea that maybe they’re not all that safe. Just avoid bouncing near the big kid doing flips in the corner, and it’ll all be okay. Right?

Wrong. Bloomberg News and the Associated Press report that a recent study in Pediatrics found that injuries from inflatable bouncy things (no one is sure what to call them), increased 15-fold over 15 years. Here’s the scoop:

It appears that no one interviewed for the articles is sure why there was such a dramatic increase in injuries from bounce houses, except perhaps that kids use them more often these days. In fact, you can buy your own “residential” bounce houses for under 400 bucks, and commercial ones for less than a grand.  That way, your kids don’t have to wait until the fair comes through town next summer to get their bounce on.