We are Jersey Strong — and Jersey Sad. 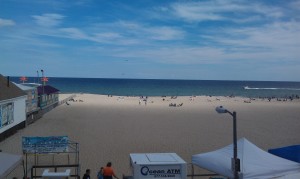 Point Pleasant Beach from atop the Boardwalk Bar & Grill, September, 2012.

Among the things I never thought my children would be excited to tell me about: “Hey Mom! There are perishables at Pathmark!” Ah, but such is life in New Jersey after Hurricane Sandy. My kids also report which restaurants have full menus, where the telephone wires still hang low over — or touch — the streets, and how long the lines for gasoline are. (“Hess has a short line. Maybe a half-hour.”) I tell them what has been postponed or cancelled (school for five days, Halloween for ten, and the Scouts camping trip for good), and who still doesn’t have power.But there’s one thing we’re not quite ready to talk about yet: our beloved Jersey Shore.

From annual vacations to Wildwood to day trips to Asbury Park, my boys have grown up with the Jersey shore as their playground. They’ve seen my cousins’ band, the Flying Mueller Brothers, summer Sundays at Jenkinson’s in Point Pleasant, and they’ve had ice cream at Nagle’s in Ocean Grove. They’ve camped with the Boy Scouts in Cape May, and they’ve been on the rides on the boardwalk at Seaside Heights. They’ve gone tubing in Toms River, and fishing along the shoreline. They are Jersey Boys.

So it made sense Friday night for us to watch the fundraiser featuring some of our Jersey faves, Bruce Springsteen, Jon Stewart and Jon Bon Jovi. But it soon became too hard to watch the film clips of Sandy’s devastation between songs. It was all too familiar — the boardwalk, the homes, the rides, the shops, the beaches — and yet all too unreal, like a bad dream of all the places where we’d had fun in the sun.

“It’s too depressing,” my 14-year-old said, bundled in blankets as we waited for the heat, which had finally come on with the power 90 minutes earlier, and I changed the TV station. After five days in the dark, driving over downed wires, and standing in lines for gas, we knew how fortunate we were to have a home, let alone one with electricity and heat. We didn’t need to be reminded how hard our Jersey Shore was hit. Every day, we think about the people there who lost so much, and the places we’ve loved to visit summer after summer.

Now and then, we manage to sneak a peek of photos of Sandy’s aftermath, of the roller coaster now in the ocean at Seaside Heights and the flooded homes in Lavallette, and we shake our heads. We donate food — non-perishables, of course — and send it “down the shore,” and we pray that Wednesday’s nor’easter goes easy on New Jersey. And then we sit in line at the Hess station, grateful to be “Jersey Strong” knowing well that we can’t help but also feel so Jersey Sad.

Posted in All in the family, America the Beautiful | Tagged Jersey Shore, vacation | 2 Responses

2 responses to “We are Jersey Strong — and Jersey Sad.”