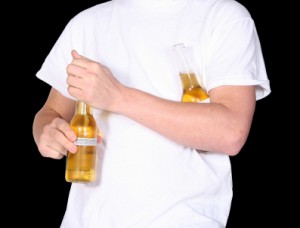 If you’re worried that your teen is falling in with the wrong crowd, take a look at your kid’s best friend’s mom.

A study of 1,386 high school students, reported in the Archives of Pediatrics and Adolescent Medicine, found that teens whose friends have authoritative mothers were less likely to binge drink, drink to get drunk or smoke pot.

The study’s authors defined “authoritative” as parents who communicate, “exert appropriate control” and are warm. The study’s other parents were described as “authoritarian” (Think: The reverend on “Footloose”) and “permissive” (Think: Puck’s parents on “Glee.”)

In other words, if your kid is hanging out in a house where Mom checks on what’s going on in the Rec room now and then, bringing down some snacks while smelling for booze and pot, your kid will be less likely to take up drinking or marijuana smoking.

But if your teen’s BFF has the run of the house while Mom is locked in her bedroom, zoning out to “Jersey Shore,” the kids might be tempted to head out to the garage and help themselves some of the beers no one keeps track of.

The bottom line: Know thy teen’s friends’ moms. Better yet: Let the kids hang out at your house.

Posted in All in the family, In the News, Momma Said | Tagged teen behavior, teen friends | Leave a response