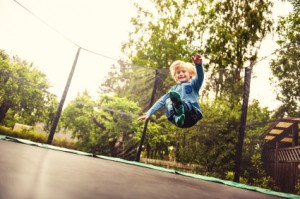 I really didn’t like to play on my best friend Paula’s trampoline when we were growing up. It seemed to me entirely too easy to misstep and land with one leg between a spring and the rubber, or to misbounce and land with your tailbone on the metal frame. Or to bounce into the neighbor’s yard.

Now decades later, the American Academy of Pediatrics has caught up with the common sense of a 10-year-old, advising against “recreational trampoline use.”

Listen up neighbors with trampolines: your bouncy, flouncy, fun, fun, fun contraptions have been declared dangerous in the October 2012 Pediatrics. Though originally designed as a “tumbling device” in 1945 as a training tool for gymnasts and later for use in military aviator training, says Pediatrics, home use has been on the rise.

There were no results on what happens when four eighth graders get on a trampoline and pelt each other with various shaped sports balls, but my son and his friends have performed such a periodic study at his friend’s trampoline.

The AAP, therefore, concluded that trampolines are dangerous. They said that enclosures, padding and adult supervision really don’t help much, providing instead a “false sense of security.” Because really, what are you going to do when your 90-pound kid is being propelled, tailbone first, toward the edge of the trampoline? Catch her?

Meanwhile, the AAP is urging its pediatrician members to discourage home use of trampolines. I’m going to do the same, starting right here in my neighborhood.

Do you have a trampoline? Doesn’t it make you nervous?

Leave a Reply to ProTrampolines Click here to cancel reply.