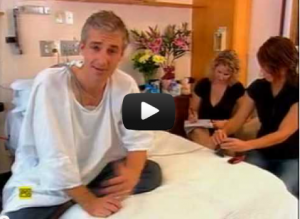 “Giving birth is like taking your lower lip and forcing it over your head.” — Carol Burnett

Carol Burnett was only partially right. She forgot “for many, many hours.” Which is why I was unimpressed with the Aussie dad and doctor that Babble mentioned this weekend who tried to simulate labor by attaching electrodes to his abdomen. An OB and a nurse or midwife helped deliver electric jolts to his tummy in increasing frequency and intensity to simulate contractions.

After two hours, he sucked on nitrous oxide to relieve the pain, and then he quit. Because you know, we moms have the option to call off birth when it gets to intense, right?

But contractions are only part of the birth experience, and frankly, that’s the easy part. The part where you pass a human being the size of a Butterball turkey for two through your nether regions is the harder part. Then there are the moms who endure C-sections. I don’t know of any other major abdominal surgery where you’re sent home and told to wake up every two hours to tend to…anything, really.

The good doctor up and quit, claiming women to be tougher than men when it comes to pain, and, presumably, went home to apologize to his wife, a mother of twins, for anything stupid he said in the delivery room.

I was left unimpressed. Now, if he tried to pull his lip over his head, then he’ll start to get a sense of what he’s really missing.

Posted in Boys will be boys, In the News | Tagged Babble, giving birth, labor pains | Leave a response