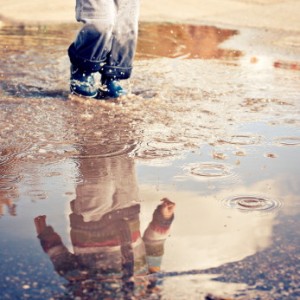 By the time I got to the school, the Cub Scouts were between shows. My son’s  den was working on its “Showman” badge, spending the afternoon in the school  cafeteria creating off-the-cuff puppet shows. Between acts, they were running  around, scarfing down snacks and generally being boys. Meanwhile, a few tables  away, a Girl Scouts troop was quietly and cooperatively working on a  project.

“And yet, the boys will grow up to run the world,” I said to the den leader.  “How does that happen?”

I sat down next to another mom and got ready to watch the boys’ next puppet  show.

“They haven’t stopped moving since it started,” the other mom reported. “But  I’m used to it.”

We watched three shows: Drunk on Cheese, The Dangers of Cannibalism and a cautionary tale involving fire and passing gas. It was like a  pre-pubescent Benny Hill or Jackass for juveniles. Meanwhile, the boys  laughed out loud.

After a fourth show – this one about someone’s leg getting stuck in a  revolving door – I turned to the mom next to me.

“The Girl Scouts haven’t left their spots since I sat down,” I observed.

“Worse, they’re working on Valentine’s crafts – in January!” she answered. We  stared at the calm Girl Scouts meeting, while one of the Cub Scouts skidded over  a table — on his back — to reach the snacks as quickly as possible.

I reiterated my concern about the boys growing up to be the men who rule the  world, and the den leader added, “Well, think about wars. Who starts wars?”

“Drunk on Cheese is a precursor to war?” I mumbled, while a mom entered the cafeteria and headed toward the Girl Scouts’ table. The mom next to  me motioned her over.

“Look at the girls,” she instructed her. “And now look at our boys. Are the  Girl Scouts always this peaceful and calm?” The Girl Scouts mom assured us that  her daughter and her troop-mates aren’t always this placid and cooperative.  Sure. Maybe they have tug-of-wars over the Bedazzler.

Then she joined us as we watched an encore of The Dangers of  Cannibalism, which ended with a paper puppet in pieces on the floor, while  the Girl Scouts quietly put away their craft supplies, and shared stickers.

“Frankly, I wouldn’t know what to do with girls,” one mom of boys offered.  “This is what it’s like at my house,” she said, pointing to the boys, who were  now laughing maniacally as the “stage,” a blanket draped over a long stick, fell  on the cast of the revolving door show.

“Time to go!” I shouted to my sons, who were watching two boys making puppets  fight each other while reviewing the “plot” of their favorite show of the  afternoon.

When we got outside, it was blessedly quiet and calm, like the Girl Scouts’  meeting.

“Hey, check out this ice!” my son announced, jumping through snow – in his  untied sneakers – to stand on top of an icy rock. His brother tried to push him  off.

“No, you quit it!” his brother retorted.

And suddenly, Drunk on Cheese sounded like a fabulous idea.