OFF MY NOODLE: The Kids Are Back in School and I’m Broke 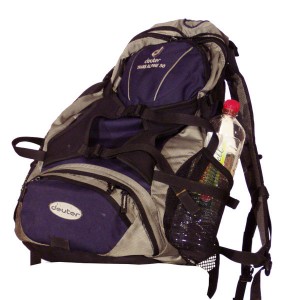 I had been looking forward to lolling around during the last days of summer, eating fudge brownie ice cream with the kids. Instead, I have been forced into action, running around like a woman possessed, surrendering my credit card to every retailer in town so that my kids are smartly attired to return to a place they’d rather never see again. This end of summer skirmish known as “back-to-school shopping” can eat a mom alive, if she’s not careful. Suddenly, at the end of August, kids not only needed new wardrobes, but also a list of school supplies nearly as long as the federal tax code.

I bet you Lewis and Clark didn’t need this much stuff when they set out to explore the Louisiana Purchase, making the happy discovery of Six Flags Hurricane Harbor in Dallas/Ft. Worth along the way. I doubt that Lewis complained to Clark, “Hey, my backpack has buffalo scratches on it. I’m not going crossing another stream until we find a decent sporting goods store so I can get a new one.”

Kids today lack this hardy pioneer spirit. They lose a single wheel from their rolling backpacks and they simply cannot cope. (Of course, you cannot find new backpacks in February, when the wheel will fall off. That’s why rolling backpacks are a curse.)

I understand why the kids need new clothes. It may be all the sunshine or the hidden nutrients in all the Popsicles they’ve been eating, but whatever the reason, even if their clothes still fit them through July, when they wake up on August 1, they will have rocketed out of their wardrobes entirely.

My kids make dramatic entrances into my room with pained looks on their faces as they demonstrate the impossibility of trying to squeeze their feet into shoes that fit yesterday but are now ridiculously small. The pants that buttoned yesterday are an inch too tight, and skirts that became stylishly short overnight will not pass muster with the uniform cops at school.

This leads to tense situations in which I dash out to purchase new pants, skirts and shoes, only to find that 35,000 other moms have beat me to it, and the only clothing left in town is either for toddlers or the unnerving size known as “extra-large-husky.”

That is why I have been spending my evenings moving buttons on pants and letting down hems, and praying that my hopeless sewing skills will hold out until Land’s End delivers the goods.

But it’s the part about having to buy all these school supplies that really gets my goat. I keep hearing that the schools need more money, and that must be true, since no matter how many billions of dollars we sink into the educational system, schools can’t manage to cough up enough for even a few pencils and rulers. Where does all this money actually go?

It isn’t for books either, since we also now have textbook fees in addition to everything else. This year, we were instructed to send the kids not only with all manner of writing and coloring equipment, but also with facial tissues and cleaning supplies! Mark my words: It won’t be long until they add to the school supply list: “Teachers.”

Of course, now that I have spent more money on school supplies and clothes than the United States spent on the aforementioned Louisiana Purchase, I have to wonder: will the kids take their studies any more seriously than they did last year? I comfort myself with the idea that when you have hit rock bottom, there’s only one way to go from there. Last year, while one child was doing math homework, he asked me to help him find a calculator.

“You’re supposed to figure out the problem on your own,” I said, “not with the help of a machine.”

“No, Mom, you’re wrong. It says right here, ‘Calculate the area of the rhombus.’  How can you calculate without a calculator?” This was the same child who thought that a thesaurus was a kind of a dinosaur, and that if God had meant for us to use a dictionary, he would have downloaded one into our Smart Phones.

Well, my kids may be less enthusiastic than I’d like as the new school year dawns, but at by golly, at least they’re dressed for success.

Posted in Off My Noodle | Tagged back to school | 1 Response

One response to “OFF MY NOODLE: The Kids Are Back in School and I’m Broke”