Stop Posting Videos of Your Children’s Tears, and Laughing 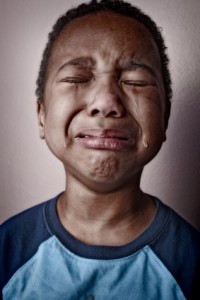 SPOILER ALERT: If you’re planning to see “The Odd Life of Timothy Green” and you don’t want to know how it ends, stop reading and clicking right now.

Then again, you will probably see the parents who filmed their kids wailing about the death of the movie’s main character on the Today Show or Good Morning America by Friday. Just you wait.

Because those parents went ahead and posted onto YouTube what they thought was a hilarious video of their children’s drastically emotional responses to Disney’s latest “feel good movie of the summer.” They dismissed their kids’ agony with a “Hey, it’s the circle of life” kind of mentality. Kids gotta learn, yo.

And the web laughed along with them. Perez Hilton reported the video of these two boys wailing in the backseat of their parents’ car is something that “just makes us giggle!” The Stir, too, understood why the parents though it was so stinking funny and suggested putting it in a scrapbook under “Our Boys 1st Tearjerker.”

But not everyone is jumping onto the “Hahahaha, these kids have been traumatized!” web-pile. In comments across the Internet, people are chastising the parents for mocking their children’s feelings. Some have called the video of the kids crying “troubling to watch” while others have called the parents a$%holes for posting it.

Naturally, this being the web and all, there’s a fair share of calling the kids names and somehow blaming these two children for the Decline of America, where, you see, we should all pull ourselves up by our bootstraps and stop eating junk and bring back Oprah to save us from ourselves. And then they all start calling each names, using entirely too many exclamation points while spelling “you’re” as “your” and “their” as “there.” Naturally.

It’s all something for those kids to look forward to when they Google themselves in a few years. Also, when they start school in a few weeks. But first, perhaps they’ll get a trip to Anderson Cooper’s set, where, I hope, someone explains why we should all stop videotaping our children’s agony and posting it for the world to see.

Imagine crying hysterically, only to have someone videotape you while mocking your emotions and then post it online. And then imagine why these kids were so surprised when what seemed like a happy-go-lucky, sweet movie — if you trust the trailer below — ended in the death of a child.

Then ask yourself if this is really what we want parenting in America to be about.

Here are the kids and their parents.

Here’s where I’ll post the link to the TV show that no doubt  interviews them later this week:

Posted in Days Like This, In the News, Momma Said | 2 Responses

2 responses to “Stop Posting Videos of Your Children’s Tears, and Laughing”