I wrote this one for Good Housekeeping a few years ago, and I thought it would be perfect for those who are back to school and the rest of us, who are dreading (or cheering for) it: 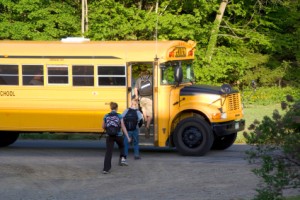 Nobody had ever said it to me before, so it gave me pause. A fellow writer  and fan of my blogs said, “You find joy in chaos.” I thought about my yard full  of boys, traipsing through the pachysandra and rooting through my garage, and I  thought, She’s right. After all, I love to be the hostess of the frat  house for fourth graders. But that was before the very next morning when I  realized that not all chaos is created equally.

I was halfway through my breakfast cereal when I noticed that my son, Chris,  was wearing a bright yellow striped shirt and shorts.

I put down my spoon and ran upstairs to find a clean blue shirt in the pile  of laundry, and ironed it along with some khaki pants. I handed them to Chris,  and then looked for some socks for me to work out in.

Among the handful of boys’ socks – none of which produced a pair – I found  two of my own socks with small pink symbols sewn on them. Never mind that one  had the breast cancer ribbon and the other a Nike logo. They were the closest  thing to a match I could find.

I put on the socks and went back downstairs, where I ran into my other son,  Nicholas, who had used so much hair gel to keep his cowlick down, I could  actually see a white film on his head. He looked like he’d been bombarded by a  large bird.

“You can’t use that much gel,” I admonished him for the umpteenth time. He  insisted he needed to use a lot of gel to keep his hair down, while I told him  to meet me in his bathroom. I washed his hair in his sink and then led him to my  bathroom, where I used a hairdryer, a comb and a lot less gel on his hair. He  walked off without complaint, and I sighed, relieved that perhaps his fifth  grade school photo wouldn’t look like he’d just walked off the set of “Nick  Slime Time Live.”

Downstairs, I sat back down to eat breakfast when the doorbell rang. I got  up, walked into the front hall and opened the door to find the 10-year-old from  across the street standing there.

“I thought I’d see if they want to go to the bus stop with me,” he  explained.

“You have 20 minutes until the school bus comes,” I reminded him. It didn’t  matter. My boys had already started scrambling toward the garage door.

Then one son remembered he hadn’t packed his lunch, so he tore into the  pantry and the refrigerator, leaving shredded cheese in his wake. The other son  pretty much accused me of hiding his coat, as though I could find it in the  first place. And then the neighbor boy was at our garage door, knocking ever so  gently, as though only the boys would be able to hear it, like a dog whistle or  a secret cell phone ring for people under 20.

I shoveled my cereal into my mouth and remembered it was paper recycling day.  So, I wrapped up the newspapers while the son with the missing coat huffed and  puffed around the kitchen to let me know his dismay over my apparent hiding of  his jacket. He gave up, grabbed a winter coat and went out into the garage,  where the neighbor boy and my other son were duct taping two skateboards together.

I don’t want to know why.

I slid into the bathroom and locked the door. My son with the winter coat  burst through the garage door, shouting, “Mooooooom!” For a second, I thought  I’d pretend I’d skipped town, but I answered him. He replied, “Will you get the  knots out of my sneakers?” When I finished in the bathroom, I sat on a kitchen  chair, pulling apart the knots in his shoelaces.

Then I grabbed the pile of newspapers and walked out to the driveway, where I  discovered it was too cold to be outside without a coat. I dumped the newspapers  at the end of the driveway and ran back into the house while the boys fiddled  with the skateboards. Meanwhile, my neighbor waited for us all by my mailbox.  Then we all walked to the school bus stop together.

When the boys got on the bus, hair gelled correctly, coats on and lunches in  their backpacks, I took a deep breath and found the joy in the chaos. You know,  when it was all over.

Posted in Boys will be boys, Days Like This | Tagged morning rush, raising kids, school | Leave a response