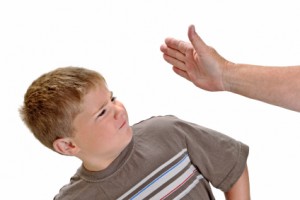 When your kid misbehaves, do you give him a swat on the butt? Maybe a quick smack on the cheek? No big deal, right? Kids get out of hand and need to be put back in their place now and then — or so the conventional wisdom has long said.

Personally, I never understood the parenting theory that essentially teaches kids, “If you are bigger than someone else, you may hit them so they behave the way you want them to.”

But there are plenty of parents who feel that spanking is a valid and effective form of discipline. CBS News reports today that researchers at Michigan State University found that nearly one in four parents or caregivers observed hit, spank or use other forms of physical contact to settle public disputes with their children.

At home, the number of parents who spank is closer to 50%, reports BabyCenter.

That’s surprising because studies have shown that spanking and physical punishment raises children’s risk for developing a mood or personality disorder. And the American Academy of Pediatrics “strongly opposes striking a child for any reason.”

But if you live in Florida, tough noogies, because schools there can paddle children despite the parents’ objections.

Lisa Belkin of The Huffington Post believes there shouldn’t be a debate about spanking because “by definition, that would require two sides. I see only one.” She asks, “Is it okay to do something to your child that would land you in jail if you did it to a stranger on the street?”

And yet, half of us are reportedly spanking our kids. Some of them commented over at CBS News:

“There isn’t anything wrong with disciplining kids with a spanking or a slap. It’s kids that are given the wussy timeouts and treated like a parent’s equal that grow up with mental problems.”

“In moderation…corporal punishment is one of the best things that can happen to a kid.”

“I spank just enough for the child to begin crying real tears (I can tell the difference): no more, no less.”

So, you have to put kids in their place, right? You know, like men used to say about women.

Admit it: Do you spank your kids?

One response to “Admit it: You Smack Your Kids”