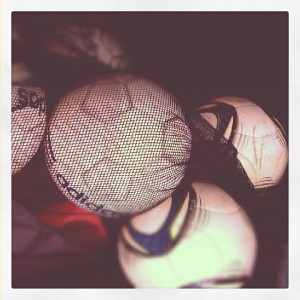 When I walked into the kindergarten, a boy — who was not my child — hugged me. I hugged him back. The whole thing felt totally inappropriate.

I had been visiting my son’s kindergarten class every week for several weeks to help kids write stories, and apparently, this boy was really happy to see me. So he did what five-year-olds are prone to do: He threw his arms around me and buried his face in my belly.

My instincts told me to hug him back, so I did. Only then did I think that perhaps I shouldn’t have put my arms around someone else’s kid, even though I knew his mother and knew she wouldn’t mind. It seemed more damaging to pry his arms off of me than to just hug the kid back, school rules be damned.

Eight years later, my son’s classmates no longer try to hug me. Instead, they follow me.

Three of the eighth grade boys on my son’s soccer team are following me on Instagram, occasionally posting comments under my photos. I comment back, but I won’t follow them. The whole thing feels totally inappropriate.

Maybe it would be okay if I was just Chris’ mom and his friends liked my photos of the baby deer in my backyard, my cat fast asleep on my desk or even the five-inch high heels I wore at a magazine photo shoot a few weeks ago.

But I am their soccer coach, which means I had to undergo a background check that included getting fingerprinted at our local police station to be allowed to clean out their slide tackle burns and shout at them to “Shoooooooot it noooooooow!”

Somehow, though, I’m really not sure it’s should be okay for me to then “like” photos of their slide tackle burns or their shots on goal, especially since, on Instagram, you click on a heart to show your appreciation. Grown woman and adolescent boys? Hearts and banter?

In real life, our communication is all part of the team-building camaraderie. For instance, I might quash their giggling at practice after I’ve made the mistake of asking for “balls” without saying “soccer” first by singing, “Balls had the queen, if I had them I’d be king.” And that’s okay because it’s between us boys.

Online though, there’s a different feel to it all. And I feel like kids and grown-ups shouldn’t be fraternizing outside of emails about when the next practice is or maybe a game of Words with Friends. I mean, when I was in 8th grade, I never heard from my soccer coach off the field. What would people say about a grown man showing his photos to a 13-year-old girl?

But the Fourth Wall of Parenting has since been broken, so that there’s no more Us and Them, Grown-Ups and Children.  First other people’s kids started calling us by our first names. Then they friended us on Facebook. Now they “<3″ our photos of our beer and open-faced sandwiches and they LOL!!!! at our tweets.

It’s fun and sweet and yet, totally inappropriate.

4 responses to “Is it Okay to Follow 8th Graders?”