They walked into the kitchen, suitcases in one hand, vuvuzelas in the other.

Vuvuzelas, in case you’ve forgotten, are those god-awful plastic horns that soccer fans blow at games. In 2010, there were stadiums full of them during the World Cup in Africa.

That summer, we had two vuvus which mysteriously disappeared soon after the World Cup ended.

Hmmm. I wonder what happened to them.

So imagine my surprise when two more vuvus showed up in our kitchen, during a year in which there is no World Cup, no less. My sons bought them last week during a vacation to the Jersey Shore with their father and his family, and yet, somehow the vuvus didn’t end up at his place. 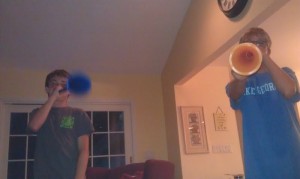 On a related note, I didn't see the cat for hours.

For hours, my kids played their vuvus. They raced around unpacking from vacation and re-packing for camp, leaving behind packs of Fun-Dip, a gumball machine and a whoopie cushion. They threw dirty clothes in the washer, searched for compasses and hiking boots, and they blew their vuvus.

At night, when the A/C refused to work in one kid’s room, he relocated to the couch while the other child seemed to relocate what had been in and on his furniture onto his bedroom floor. And they blew their vuvus.

In the morning, as one kid rushed around looking for everything that he couldn’t find the night before, the other one played soccer on the Wii. I began picking up couch cushions and blankets off the floor, only to discover that we’d somehow stepped around a gift from the cat, who’d hidden much of the night: a dead mouse.

It felt like a frat house on a Sunday morning: the aftermath of chaos and noise with something slightly disturbing smack in the middle of it that no one had seen placed there. I can’t decide if it was meant to be a peace offering for the vuvuzelas, or something more like a horse head in a mobster’s bed.

Later, one of the vuvus went to camp. The other one has mysteriously disappeared. And the cat has reappeared — for now.