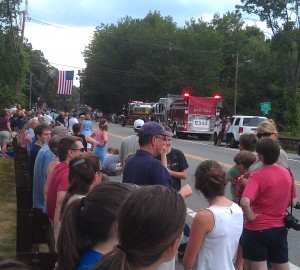 I didn’t realize it was a funeral procession until I’d — daringly and obnoxiously — pulled my car into the middle of it. I was 22, and I was on spring break in Washington DC, where I’d decided it was taking too long to get to Arlington National Cemetery, what with all that traffic.

As soon as I realized my mistake, I found a spot to pull over and feel really, really stupid until the funeral procession finally finished driving by.

So, that’s what I was doing when I was 22. When Jonathan Batista was 22, he was serving his country in his first deployment to Afghanistan. Until July 8th, that is, when he was killed in Kandahar province after his unit was attacked by enemy forces in a war that started when he was in sixth grade. 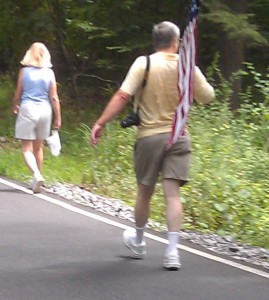 That’s exactly what so many of us did this afternoon by lining the street leading to the church where the funeral would be held, some of us carrying American flags.

There were fire trucks and Boy Scouts and an enormous American flag draped from two cranes. There were police motorcycles and cars from four towns, including mine, and soon, there was a hearse with a United States Army sticker affixed to its back door.

There was silence as it drove by.

When I spotted his family’s limo, it felt as though my heart did a free-fall and a flip.

“Imagine getting that knock on the door,” a neighbor said after the procession was over.

I thought about my boys at scout camp, and I shuddered. Then I turned around and went back home, thinking about Specialist Jonathan Batista’s parents, and their son, who died at 22.