(Reluctantly) Explaining the Mafia to the Kids 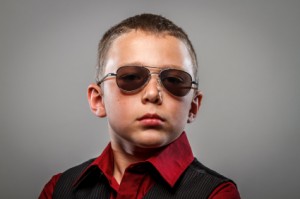 Thanks to the TV show Mythbusters, I spent my morning trying to explain  to my tweens about unions, the Mafia and where the heck Jimmy Hoffa is. While  it’s not exactly the kind of breakfast table conversation I would have chosen,  it is what the G in PG is all about. If only I was better at it.

Last  night, on a re-run of Mythbusters, the show that uses science to  confirm or debunk urban myths, the hosts set out to find out if it’s true  whether former Teamsters leader Jimmy Hoffa is really buried in Giants Stadium.  (For the record: myth busted.)

I guess it took all night for the story  to sink in for my kids, because they brought it up at breakfast this  morning.

“Who’s Jimmy Hoffa again?” my third grader asked. First, I  explained what a union is. Thanks to the recent writers’ strike, that part was  easy, though I had to point out why I, a non-Hollywood writer, wasn’t one of the  strikers.

“Am I gonna hold a picket sign outside my home office and shout  at myself?” I asked sarcastically. My fourth grader offered to join me.

“Okay, what’s the Mafia?” my younger son asked. Oh boy. I pretty much said it’s  like a gang for grown-ups, and explained how the mob might work if, say, he  opened a store and they wanted a cut of the profits.”

Oh, but there’s no  Mafia around here,” he said, reassuring himself. “Here” is northern New Jersey.  You know, Tony Soprano country. I tried not to laugh, and then explained why it  was even plausible that Hoffa was buried in the Meadowlands – just 20 miles from  us – in the first place.

“But I could just tell the police if the Mafia  was after me,” he said. Soon, I was gingerly explaining how the Mafia might keep  him from telling the authorities. I started out describing how the mob uses its,  er, “influence” to “persuade” people to do what they say. Eventually, though, I  ended up sounding like Vito Corleone talking shop on The Godfather. I  even used words like “shake-down” and “bump off.”

Dora, The  Explorer was so much easier to explain. Even in Spanish.

I noticed  that my third grader was taking notes. He had written down “Hoffa,” “Mafia” and  “The Sopranos.”

Great. Now I’m going to be the mom who provided all the  kids on the school bus with the tutorial entitled, “The Mafia and You: An  Insider’s Guide for Residents of New Jersey.”

Flustered, I tried to turn  it into a teachable moment. “They’re not sure where Jimmy Hoffa really is,” I  said, “but now you know why people shouldn’t be bullies.” My son scribbled  something down while I wondered, Did I just say the Mafia kills  bullies?

Luckily, the boys lost interest in my dissertation  on organized crime and wandered off. As for whether I provided my children with  quality parental guidance, it’s plausible, though more likely, I’m pretty much  busted.
Originally ran on GoodHousekeeping.com.