OFF MY NOODLE: Shut Up and Parent 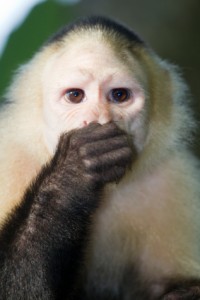 My husband and I are experimenting with a radical new parenting technique that we call “Keeping Our Mouths Shut.” I had heard of other parents attempting this terrifying feat, but I never thought we would get this desperate.

At first, the idea of parenting simply by Keeping Our Mouths Shut may sound absurdly easy. Why, any higher primate could do that, you might conclude. But silent parenting takes enormous self-discipline and is also a sign that you have exhausted your bag of tricks.

None of this would be necessary if children didn’t each come equipped with something called a “personality.” If you have more than one child, each personality is guaranteed to be in mortal conflict with the personalities of siblings, and often, of parents. Worse, teenagers may house multiple personalities simultaneously.

As a coping mechanism, we have bought thousands of advice books written by people who have never met our children but who presume to teach us how to rear them anyway. Ideally,  children respond to the swell advice given by strangers and grow up to be loving, respectful, clear-thinking and moral individuals. However, real life is messy, so despite following “expert” advice, sometimes, teenaged kids may surprise Mom and Dad by coming home with nose rings and announcing that they’ve heard backpacking in Nepal is much more educational than boring old junior college.

Some of the wackier parenting tricks we’ve tried included everything from putting beans in jars for kids to earn treats (great for the budding actuary in the family) to the wimpy strategy of “reflecting kids’ feelings” back to them. Reflecting our kids’ feelings back to them only yielded the humiliating result of one kid cocking his head to one side and asking, “You feel okay, Mom?”

We then hit upon a plan that we thought was simply genius: We would talk to the kids as if they were intelligent, reasonable people who would respond to logic! We started with straightforward examples, such as, “Your math teacher may have serious bad breath, but telling him may upset or embarrass him. He might even lower your grade on the test.”

In this case, logic could not compete against the irresistible lure our son felt toward sharing his observation with the teacher. The teacher retaliated by somehow making his breath even worse for the rest of the year.

By the time kids are teens, most parents are wrung out. The parenting books have become large dust magnets, destined for Good Will. This is when parents usually start to reminisce like soppy greeting cards about the good old days when their tykes were small. Even though those were the days when little Brandon nearly short-circuited the neighborhood with those pliers, even the most mischievous kids were once young enough to believe, endearingly, that their parents know more than they do, a condition that evaporates the moment the braces go on their teeth.

Perversely, kids stop listening to parents exactly at the time when they are old enough to commit heart-stoppingly dangerous antics, such as driving, dating, and taking out business loans. This is when parents begin to appreciate the concept of military boot camps, even for girls.

This brings us to our latest parenting ploy of Keeping Our Mouths Shut. Billions of words of loving and wise parenting council had been as effective as trying to get the dog to stop barking maniacally at the mailman, so we figured we had nothing to lose by letting our kids learn the hard way.

This strategy has required both teamwork and a crisis hot line. For example, I was on the verge of telling one kid, “If you go for a job interview with your hair spiked like that, you may not get hired.” I had to report this urge to my husband, who restrained me from offering any such useless advice, on pain of canceling my MasterCard.

Likewise, I must intercept his attempts at parenting. The other day, after listening to a doomed attempt by one child trying to organize a garage sale with his friends, my husband said, “I can’t take it anymore! I could tell him how to salvage this mess in two minutes.”  This was my cue to grab my husband’s arm and tie him to the recliner until the temptation had passed.

“What good is all our life experience if we can’t teach it to our kids?” he asked plaintively.

“I don’t know,” I said. “Maybe we should write a parenting book.”

Posted in Off My Noodle | Tagged parenting teens, teens | 1 Response

One response to “OFF MY NOODLE: Shut Up and Parent”