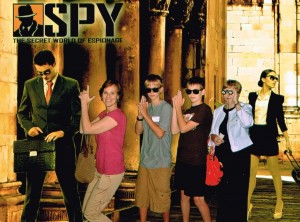 I was going for Charlie’s Angels. My mom looks like she’s in an ad with the headline “Look what’s new at Nordstrom’s!” The kids rocked it, of course.

There’s a moment when you’re faced with the laser beam maze that you realize you either have to jump, or you have to roll.

I chose to roll.

Which is why the poor guy working at the exit to the laser beam display at Discovery Times Square’s SPY: The Secret World of Espionage yesterday had the misfortune of seeing me, a middle-aged mom, roll out of the thing with a stupid grin on my face.

My boys had both set off the alarm by hitting a beam. I had not, simply by choosing to stop, drop and roll with seconds left to go.

It never occurred to me not to hit the ground rolling, despite my advancing age, because Debbie Kaplan started it. The Jersey Kids blogger had challenged me to get through the 20-second laser maze in fewer than three times, the number of times it had taken her. Of course, she was wearing a dress, but that’s her own fault for not dressing properly for spy work. Thanks to my pants, I did it on my first try.

In your face, Debbie Kaplan!

Later, I told my mom and the kids that my shoulder was aching, thus indicating that perhaps I shouldn’t do silly things like hit the ground rolling just to win a dare.

My mom was quiet for a moment, and then a sly grin came over her face.

Suddenly, I understood why it didn’t occur to me not to roll my way out of the laser beam maze in the first place: it’s in my genes.

In your face, Debbie Kaplan’s mom!

Note: Thanks again to Discovery Times Square for the free press passes. Next time, I’ll bring Motrin along.

2 responses to “Spies Like Us: In Your Face, Debbie Kaplan!”