Cancerversary with the Space Shuttle

I ran this yesterday at my other site, ParentingWithCancer.com. I thought I’d dance for another day here at MommaSaid:

Nearly five years to the moment I had been diagnosed with cancer, I got to see the space shuttle Enterprise being hauled up the Hudson River toward the Intrepid Sea, Air & Space Museum.

The space shuttle thing was way more fun.
How can I remember what time it was when I was diagnosed with lymphoma? Here’s how:
So, here’s what I couldn’t help but see and hear moments after being diagnosed with lymphoma:
Lovely kids. Lovely organization. Not at all what I needed to hear or see at that moment.
So when I found out that the space shuttle Enterprise would be towed up the Hudson River today while I was not but a block away at the Javitz Center, I left the conference I was attending and sat in the sun on a wall in the little park next to New York Waterway ferry slip.
Then, at about 11:30 a.m., almost exactly five years to the moment that I found out I had cancer, I saw the crane arrive first. 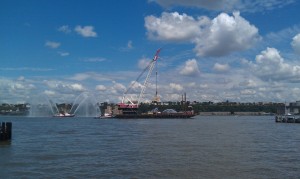 Frankly, all the tourists and families lined up on the shore began to worry that the shuttle was somehow hanging off the other side of this barge and we wouldn't see it after all. 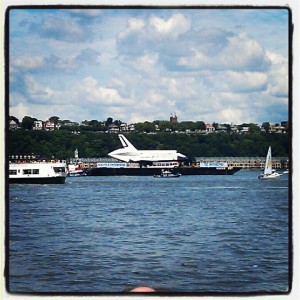 Then she appeared. I Instagrammed this to make it look even cooler. I didn't mean to include the bald man's head in the shot, yet it's somehow fitting, given my cancerversary and all. 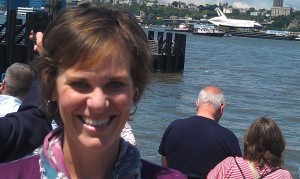