What Year is This? SAHMs Need Hubby’s Permission to Apply for Credit 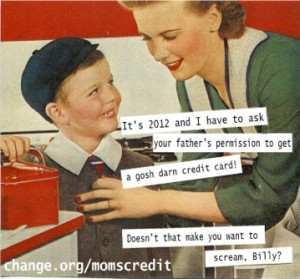 Want a credit card? If you’re a stay-at-home mom, you will have to ask Hubby for his permission. And that pisses Holly McCall off.

Yesterday, stay-at-home mom Holly McCall, along with representatives from MomsRising, met with Director of the Consumer Financial Protection Bureau (CFPB) Richard Cordray to address stay-at-home parents’ concerns about their access to credit.

McCall had delivered more than 45,000 petition signatures she had collected on Change.org and MomsRising.org, asking the bureau to reconsider this “Mad Men” era policy that prevents at-home parents from claiming household income in order to apply for a credit card.

Though McCall has managed her family’s money for years, the 34-year-old mom of two from Vienna, Virginia was denied a Target credit card last fall. She blames the 2009 Credit CARD Act.

The law was passed in 2009 to protect consumers from unfair and deceptive credit card practices. But some stay-at-home parents argue that a Card Act rule that took effect last October has made it harder for them to get approved for credit cards.

Aiming to protect consumers from racking up too much debt, the Federal Reserve now requires credit card issuers to consider individual income from applicants instead of household income.

It sounds like something Betty Draper would go through. In fact, back in 1961, my mother was working and making as much money as her husband when she was denied a credit card in her own name. Her income was effectively ignored, and her husband’s name was placed on the card. (I’m looking at you, Bloomingdales.) Now 50 years later, it apepars we’ve gone backwards.

McCall finds the whole thing demeaning. At her petition site, she wrote: “It is 2012, and because I’m a stay at home mom, I can’t get my own credit card.”

Of course, this affects stay-at-home dads, too, so please spread the word among yourselves. Says the petition, “The Consumer Financial Protection Bureau has the ability to change the CARD Act without going through a long, painful Congressional process.”

3 responses to “What Year is This? SAHMs Need Hubby’s Permission to Apply for Credit”