The Precipitous Drop from Mom 2.0 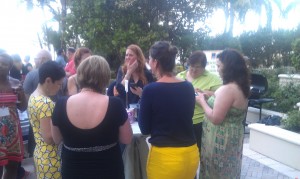 Mom 2.0 attendees tweeting and planning the next big thing.

The soup guy was having none of it.

At the supermarket yesterday morning, he was busy putting out the jumbo pots of freshly made soups, being careful not to spill them or burn himself. I was standing nearby with an empty soup container and a stupid grin on my face.

“I got here at the right time!” I exclaimed, gesturing toward the soups in such a fashion that my teenagers, had they been with me, would have snuck off to avoid being seen with a dork like me.

The soup guy ignored me completely.

I’d just spent the weekend at Mom 2.0, the magically wonderful blogging conference where ideas are born, held this year in Miami. We meet and share and collaborate and network and celebrate the next big thing. We swap business cards and tweet each other incessantly and match one another up with like-minded rainmakers.

So I guess I expected the soup guy to smile and perhaps brainstorm a really cool app that alerts you when the soups are ready and tweets which soups are available (with the hasthtag #soups-on) and maybe creates a word cloud of soups and give you soup credits online. Or whatever.

Instead, he seemed annoyed that I was standing between him and the little slots where he was trying to slide the cards that indicate this soup is New England Clam Chowder while that one over there is Italian Wedding Soup.

He didn’t want to play, because most people in most jobs don’t play. Not like entrepreneurial creative types who never shut off their brains and always know how much (or how little) is in their bank accounts, anyhow. Not like the people I met at Mom 2.0, who, no doubt, are all coming off their sharing and brainstorming highs and getting back to the task of buying soup. Or whatever.

They, too, might feel devastated, because it’s a fast, precipitous drop from the conference back to real life. But somewhere, someone will dust herself off and begin the hard work of putting all that networking and sharing and brainstorming into something magically wonderful. Because #soups-on. In our brains, it’s always on.

2 responses to “The Precipitous Drop from Mom 2.0”