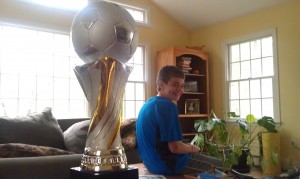 The tennis ball left my son’s right foot, flew over the coach and hit the baseboard heater with a loud CLUNK, causing the cat to scurry out of the room.

“Do you really want this to be the time the team looks back to and says, ‘That’s the year Chris broke our trophy’?” I asked my son and center defender for the U-13 soccer team I coach and the kid always with a ball at his feet in the house.

It’s our two weeks with “the” trophy — the big, honkin’ World Cupish trophy our team won at a soccer tournament in March. Our head coach Alex had promised that each kid would get to keep it for two weeks before it makes a final stop at his house — until his kids break it, I suppose. Until then, I worry.

The price tag on the trophy’s base says it’s worth 50 bucks, but that’s without the customized “Champions” plaque. Besides, we won it in a breathtaking, heart-stopping series of penalty kicks, which, as Visa would say, was “priceless.”

I moved the trophy to the table behind the couch, hoping that the photos of my grandfather and my boys in Tigger and lion Halloween costumes circa 2003 will take the hit of an errant tennis ball or pillow like good defenders do. And, oh yeah, I remind my kids constantly not to throw or kick anything til it’s airborne inside the house, just like the Brady Bunch warned.

Still, I worry about the trophy. As a coach, I display it proudly. As a mother, I fear for its safety. Also, for the amount of time and effort it would take to replace it.

Tonight, I shall pass the trophy over to another defender and the worry over to his mother. And then I shall hide the tennis

Posted in Boys will be boys, Days Like This | Tagged soccer, trophy, youth sports | Leave a response