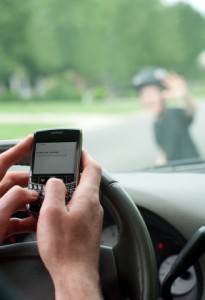 Time was, kids learned how to do stupid things through word-of-mouth. Now they have YouTube as a tutorial for stupidity. Among the unsafe, scary things teens are into these days are:

Car surfing or bumper surfing. Go ahead and put it in the search field at YouTube and you’ll find no shortage of video of eejits “surfing” on top of cars, or hanging from the bumpers. If you think your kid would never do something so dangerous, consider George To, a Mississauga teen currently in a coma after he toppled off the back of a van he was surfing on in a parking garage.

“The Choking Game” This ABC News video highlights the dangers associated with the Choking or Pass-out Game, where teens affixiate each other for the rush. Kids get a buzz from passing out, having been choked by their buddies. Some end up with seizures or worse.

“When people text, it’s as if they are closing their eyes behind the wheel – often for the length of football fields, depending on how fast one’s driving.”

Tomorrow, I shall write about puppies and rainbows, okay?

One response to “Even Smart Teens Do Stupid Things”