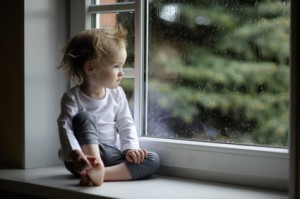 They would stand at the window, holding their hockey sticks, begging me to come out to play. Boys, all of them. High school boys, including my big brother Scott.

Scott and his buddies would play street hockey in my grandparents’ driveway next door, and whenever they needed another player, which was often, they’d ask me to come out to play.

I’d pull on my white knee pads, dirty with driveway and grass marks, over my acid washed jeans, grab a hockey stick and head next door. Some of the boys wouldn’t check me — a 9th grade girl — into the garage doors, but my brother was happy to oblige. And I checked him right back.

Frankly, it was great training for the business world.

Odd as that was for the 1980’s, you’d think that girls playing outside, even if they’re not diving into the bushes for the ball in a scrum of boys, wouldn’t be an oddity these days. Yet a new study shows that preschool girls are 16% less likely than boys their age to be taken outside by their parents to play.

According to Time magazine, the reasons for this disparity in outdoor play include: Boys ask to go outside more and parents assume that girls are less athletic and less inclined to run around outside.

But it isn’t just the girls staying indoors. Some 42% of kids who don’t attend daycare regularly don’t go outdoors once a day.

Now I’ve been a stay-at-home mom, and I know that if I didn’t get my boys outside to play at least once a day, weather permitting, they’d crumble into a whiny mess by 5 p.m. — right after I did. Somebody ought to check on these at-home moms. Maybe they’re being held hostage in the pantry?

So, who does go outside? Kids of gym rats. Mothers who worked out more than four times a week were 50% more likely to take the kids outside once a day than moms who didn’t exercise at all.

The bottom line is that many kids don’t get enough outdoor play, girls least likely among them. This spring, get your kids outside to play. Girls, boys, all of them. A little fresh air is good for everybody.