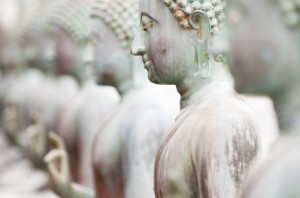 Almost everyone I know in my age group seems to be struggling mightily these days. Marriages are crumbling, parents are falling ill, children are morphing into terrifying teenagers, and upper arms are less tank-top-friendly than ever before, making the upcoming summer season a most mixed blessing. If anyone out there is happy and they know it, please do clap your hands (and let your arms jiggle joyfully) right now because there is not a whole lot of applause going on in my circle these days.

It almost makes one (me) want to seek something larger to believe in, something to make it all seem worthwhile. Something, dare I say, spiritual.

I’ve always been allergic to the arrogant we’re right, you’re not aspect of organized religion, having been raised by a lapsed-Catholic mother and Jewish-turned-Unitarian father (so, yeah, Christmas tree, but no menorah). Then I married an avowed atheist (who asked for a menorah for Christmas; go figure) and together we raised our two adorable little heathens. (The tradition continues!)

And now here I am, mired in midlife malaise, suffocated by cynicism. Given my spotty religious past, my god-seeking options are somewhat limited at this point. But there’s always the Buddha: Look at him, sitting there quietly, no crosses to bear, no persecution complex. Who wouldn’t want to have what he’s having? Plus he seems like a really nice guy, a total mensch.

My soul-searching fantasy is a month-long Vision-quest involving bells and the Himalayas, but since that’s not feasible, I decided to try a meditation class advertised at a groovy, anything-goes church in my neighborhood called The Church of Gethsemane. (Bar mitzvah? Communion? Gay wedding? Some hybrid of all three? Nothing throws them, I promise.)

The South Slope meditation took place on a Monday evening in the church’s basement. In lieu of the Himalayas, I was hoping for low lighting, candles, incense, floor mats and liberal use of the word “om.” Instead, I entered a flourescently-lit basement with 3 rows of folding metal chairs and a table with a display of inspiring texts on meditation (which I misread twice–first as medication and then as mediation. Can you tell how fried I am?) A handful of blue-corn tortilla chip dregs sat unappetizingly on a cake-sized paper plate. I checked to make sure I hadn’t accidentally walked into a 12-step meeting. Nope. We were going to meditate.

The upshot? It’s not easy to sit silently for 20 minutes on a folding chair under glaring, buzzing lights–but maybe that’s the point. I kept thinking that if only the lights were dim and we were sitting on the floor in the lotus position, then I’d be able to fully concentrate on my breath and stop obsessing about how I’m going to afford to fix the leaks in the bathroom ceiling and why I’m so lame at meditating and why I thought for a minute that I, of all people, could calm my busy, busy brain.

After the sitting part, the woman who led us gave a little talk on how we’re all so in our own heads and how we mistakenly believe that if we could just tweak our external circumstances–swap this for that, finally get our ducks in a row–everything would be OK and contentment would prevail. During the brief Q&A that followed, I was the only one who spoke up. I asked if the chairs and the bright lights were intentional, a lesson in finding peace among harsh external circumstances, perhaps? (Apparently not. Pure coincidence.)

So, while I didn’t emerge whole and fixed, as I’d hoped, I might possibly be one or two breaths less cynical, which is a start. Next up: The “Meditation for Beginners” DVD I ordered from Amazon.

One response to “LIVING IN SPLITSVILLE: Meditation is My Midlife Medication”