Laptop Shootin’ Dad Would Do it All Over Again 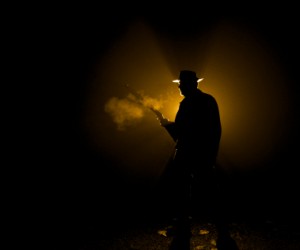 The gun-toting “Facebook Parenting” dad, Tommy Jordan, who shot his daughter’s laptop as punishment for her Facebook rant about her parents says he’d do it all over again. Turns out, he’s not alone in standing by his gun. Some 72% of people surveyed at Today.com felt his punishment was appropriate.

I was beginning to think that I was the only one who thought his actions were at best juvenile and at worst abuse, when the light shone upon Matt Lauer, and he said this on national television:

To which Mr. Jordan replied that he’d tried to do things the adult way, but had to stoop to her level to get her attention. Then he gave Hannah Marie the hard drive from her laptop as a consolation prize to show what a good guy he is for not shooting up her data. He told Lauer:

Everybody assumed that this was a hot-headed rage when I did this, but just for proof, here’s Hannah’s hard drive. There was a little bit of thought in it.

His biggest regret? All the scrutiny the family has gotten online since the video went viral last month by people who think the Jordans are “uneducated country people.”

It’s all about his image, which he’s attempting to protect at his new web site, 8 Minutes of Fame, where his recent rant is against Dr. Phil.

Eight minutes? Oh no. I predict a parenting show starring the Laptop-Shootin’ Dad to appear soon. After all, he’s already got more than 31 million views on YouTube. And that adds up to way more than eight minutes.

Here he is on the Today Show with his wife and daughter:

What do you think? Did he do the right thing?