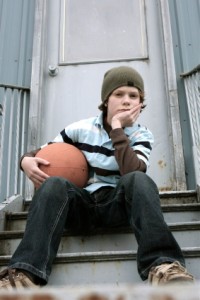 Do your kids tell you they hate visitation? “I don’t want to go!” “She never does anything with us!” “It’s so boring over there!” Those might be some of the things you hear. Here’s your reality check. Lots of parents are hearing the same things.

Pre-Divorce Complaints
Think back to your life before your divorce. There were times your kids complained about their lives. You were mean, you wouldn’t let them watch TV, you made them clean their rooms, you wouldn’t give them money for the ice cream truck, they were BORED, etc.

Life wasn’t a bowl of cherries for them then. And despite their complaints, you were a good parent and were raising your kids well. If someone had told you that because of these complaints, you shouldn’t get to spend time with them and parent them you would have been livid. You’re now dealing with the same complaints, only in a different setting.

Stop the Guilt Train
You feel guilty about the divorce. That’s completely normal. It’s also completely normal to work overtime to try to make it up to your kids. You somehow (wrongly) believe you’ve ruined their lives and are grasping for ways to make it better. They complain about going to the other parent’s house and it’s like a knife in your heart. My kids are unhappy and I did it to them! I must fix it!

The reality is that kids complain about their parents. Always. Whether there is a divorce or not. And if your kids are spending time in an unfamiliar setting with a parent who might not be used to spending a lot of solo hours with the kids, there are likely to be bumps in the road. Which equals many, many complaints from your kids. These complaints are normal for the situation. Your child is not in an unbearable situation and you should not be putting on your super hero cape and trying to “rescue” them.

Hand Over the Reins
One of the hardest things as a single parent to accept that the other parent may not parent as you would. He or she will not make the same choices, follow the same rules, or have the same attitude about parenting. And that’s really ok. There isn’t one correct method. And everyone makes mistakes from time to time. This is the person you chose to have children with. This is your child’s parent. He or she is not perfect and your child isn’t always going to be thrilled to spend time there, but in the long run, having a relationship with this parent will be a good thing for your child.

Brette McWhorter Sember is a retired family attorney and mediator and nationally known expert about divorce and parenting after divorce.  She is the author of The Divorce Organizer & Planner, How to Parent With Your Ex: Working Together for Your Child’s Best Interest, The Complete Divorce Handbook, and The No-Fight Divorce Book: Spend Less Money, Save Time, and Avoid Conflict Using Mediation. Her web site is BretteSember.com and she blogs about divorce at SolveDivorce.com