SUDDENLY FRUGAL: How Will You Pay for College? 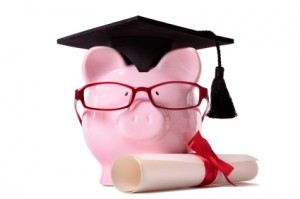 My eldest child is a junior in high school, which means my husband and I still have an 18-month reprieve until we have to take the plunge and start paying for college. Even so, we are well into college visits, and have been working with our daughter to narrow her college choices and help her figure out what college would be a good fit for her. At the same time, we’ve really begun to crunch the numbers about paying for college, and what we’re coming up with is scary.

According to the Net Price Calculator that the Federal government now requires colleges and universities to post on their websites as part of the Higher Education Opportunity Act of 2008, the amount my husband and I should be able to afford to pay for college is more than we earned as starting salaries after college–that’s both of our starting salaries added together. Granted, when my husband and I graduated from college in the late 1980s, college tuition cost a lot less. Actually, with room and board, college today costs more than triple what we paid for a bachelor’s degree.

We are hardly part of the 1% and yet, somehow, someone seems to think we can afford to pay in the mid-five figures, out of pocket, for college.

It’s a well-known fact that college costs have been rising faster than inflation. Much of the blame for that increase in paying for college comes from parents and kids.Today’s college “shoppers” are savvy and want certain amenities at college that they enjoy at home. That’s why many college campuses have state-of-the-art fitness facilities, a Starbucks in the library, free Wi-Fi throughout the campus, and dining halls with menus created by the Barefoot Contessa or featuring Mongolian barbecue. If you don’t build it, they won’t come. In other words, if students don’t see what they like at many schools, they will simply send their tuition deposits elsewhere. And believe it or not, colleges are businesses–they need their income. If their income goes elsewhere, then that’s a problem.

In the meantime, state governments are slashing their financial suport for state colleges and universities. In Pennsylvania where I live, big universities like Penn State found last year that they were losing 50 percent of their budget from the state capitol, Harrisburg.  This year Governor Corbett has similarly bad news: They are cutting budgets an additional 30 percent.  And now we’ve got President Obama telling colleges and universities during his State of the Union address that they have to contain their costs.

Meanwhile, parents like us will soon be staring down tuition bills that we can’t imagine being able to afford to pay for college. Did we save enough for college? Clearly, we didn’t. But we have been saving–both girls have had 529 plans, in one form or another, since they were born. However, given today’s tuition rates, even if the stock market hadn’t crashed and burned, or our investments hadn’t taken a hit during the recession, we simply never earned enough to put away enough money to pay tuition out of pocket.

We had a glimmer of hope when, while crunching numbers this past weekend, we asked ourselves, “Hey, is college tuition tax deductible?” Because in fact, it is. But here’s the rub. You have to earn under $65,000 filing as a single or $130,000 filing jointly to qualify for that tax deduction. Even so you can deduct $4,000 only. That’s one $4,000 deduction, even if you have two kids in college. If you earn a bit more–$80,000 as a single or $160,000 filing jointly–you can deduct up to $2,000. Again, that’s one time only, regardless of how many kids you have in college or how much you pay for college. Those who earn up to $180,000 and are filing jointly may also be able to deduct $2,500 per student under the American Opportunity Credit.

According to the Bureau of Labor Statistics, six in 10 college students are enrolled in four-year institutions. The College Board says that the average American college student pays more than $8,000 at a public college for in-state tuition–that’s tuition only, no room or board, which usually adds another $10,000 to the bill–and $28,500 for tuition at a private college (again, not including room and board). Even community college tuition can cost close to $5,000 a year. Yes, these small deductions can help the families earning under $180,000 save some on their income taxes, but it is hardly enough to make a difference in this economy and with tuition rates rising the way they are.

If President Obama wants to fix the higher education crisis, here’s an idea that I’ll bet both Republicans and Democrats will find intriguing–make college tuition 100% tax deductible. If, as President Obama said in his State of the Union address, “Higher education can’t be a luxury. It’s an economic imperative that every family in America should be able to afford,” then why not help make paying for college more financially feasible for all families by making tuition tax deductible–all of it and for all of us? Don’t you think this would allow more American families to send their children to college–even if a state college or university is all they can afford?

And trust me, state schools here in Pennsylvania are no bargain. While next year’s in-state tuition at Penn State hasn’t been posted yet, in 2011 freshman and sophomore Pennsylvania residents who attended Penn State’s main campus and lived there paid more than $27,000 a year. With fees like that, it’s no wonder U.S. News ranked Penn State as the most expensive public college to attend, even as an in-state resident. It’s also no wonder why more families cannot afford to send their children to college.

Do you have any secrets to paying for college? Please share them with us.

Leah Ingram is the founder of the Suddenly Frugal blog and the author of 14 books, including Suddenly Frugal: How to Live Happier and Healthier for Less (Adams Media, 2010) and Toss, Keep, Sell: The Suddenly Frugal Guide to Clearing Out Clutter and Cashing In (Adams Media, 2010). Leah appears regularly in frugal-living segments on the “10! Show” on NBC10 in Philadelphia and is a blogger for the NBC Universal website Home Goes Strong. Recently, Leah launched a new frugal venture called Philadelphia on the Cheap. This site focuses on deals, discounts, and freebies in the Philadelphia area—where she lives with her husband, two teenage daughters, and dog. Follow her on Twitter @suddenlyfrugal.

One response to “SUDDENLY FRUGAL: How Will You Pay for College?”