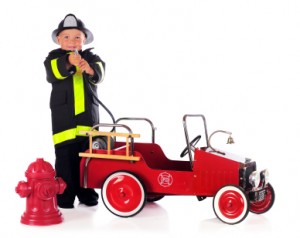 Who do you call when there’s a fire? Kindergartners know the answer: 9-1-1. At my alma mater, Boston University, however, they call Mom and Dad.

Lenore Skenazy at Free Range Kids reported yesterday that when a fire broke out at an off-campus house occupied by seven fraternity brothers from Sigma Alpha Mu, one of them called home instead of 9-1-1.

BU Police Chief Thomas Robbins says his department received a call from a parent of one of the students in the apartment, whose first response was to call home. Robbins says he hopes that students learn to make their first and immediate call to 911 or to the BUPD…

Back in the day, I spent many a weekend night in homes just like theirs, off-campus in Allston, Massachusetts, including one rugby team party where I made sure to take note of where the telephone was located. (Note to Gen Y: We did not have cell phones back then. We actually left notes on each other’s doors to meet up places. Shudder.). I thought I might need to call 9-1-1 on the crazy guy who was contemplating throwing the TV out the window.

I did not consider calling my parents. (Then again, they would be more concerned with what I was doing in a house where a large man with no neck was considering tossing large appliances onto the sidewalk.)

Nowadays, the cell phone has become a wireless umbilical cord for our children, even when they’re not children anymore. And though this man-boy surely was frightened to discover a fire in his home, BUPD has reminded him — and the whole campus — to dial 9-1-1 first when there’s a fire, and Mom and Dad later, preferably waiting until they’re safely outside before they hit Send on their parents’ number.

Here’s a handy reminder to study:

Second Notification:
Parents, particularly those who live in another state
Girlfriend/Boyfriend who heard about the fire on Facebook and are freaking out about you

Who do you call when there’s a fire? Ask a kindergartner. As for the students at my alma mater, well, maybe now that everyone safely escaped the fire, they remember what they learned when they were five.

Note: MommaSaid may write all saracastically at times, but we are moms who worry. Best wishes for a speedy recover for the students injured in the fire.

Posted in In the News | 1 Response

One response to “Fire? College Students Call…Mom and Dad.”