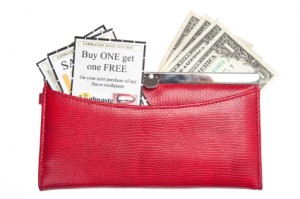 DAIRY: Just this week, my supermarket offered a deal I couldn’t refuse: Buy five boxes of a certain kind of cereal, get a coupon for a gallon of free milk, valued up to $4.50. What a great way to get a free gallon of healthy fat-free milk! I already had $8 worth of coupons for the cereal, so I saved in all aspects of this transaction.

According to the circular, the coupon for free milk would have to be applied to a “future” shopping trip. But I wasn’t about to go back to the store for my free milk. Instead, I broke my shopping order into two transactions, buying the cereal first, and then applying the free milk coupon I received to the second transaction. Now that’s good extreme couponing.

You can save on other healthy food in the dairy aisle as well. I saved money on low-fat yogurt, which was marked down to $.60 per cup. Then I applied a coupon I had to save $.40 on six, which doubled to $.80. So for six cups of yogurt, I paid $2.80 or about $.46 per cup. I get my best yogurt coupons, when they’re available, by the way, via Coupons.com.

My extreme couponing in the dairy aisle doesn’t end there. I’ve been able to save money on Silk almond milk, thanks to coupons, too. As far as eggs go, both Eggland’s Best and Land O’Lakes offer coupons that you can use to save money on organic, cage-free eggs.

ORGANICS: Newman’s Own frequently offers coupons for its salad dressings and salsas–both organic–and recently I printed out coupons from SmartSource.com for Muir organic tomato sauce. The coupons were for $.75 and $.85 off. The cans of organic tomato sauce cost $1.99 each. My supermarket doubled each of the coupons I presented–$.75 became $1.50 and $.85 became $1.70–meaning that my final extreme couponing cost for each can of sauce was $.49 and $.14.

FROZEN FOOD: Good coupons and sales for healthy frozen food don’t happen all that often, but when they do, you can get some great extreme couponing done. Recently, I got Boca Burgers on sale and with a $1 off coupon, and Green Giant frozen vegetables, five boxes for $6 or about $1.20 per box. I had a coupon for $.60 off five, which would double to $1.20 off five. That meant that my final cost for five boxes of frozen vegetables was $4.80 or $.98 per box. In the off-season, when fresh vegetables from my garden isn’t an option, this is a great way of being able to continue to offer vegetables at dinner and at a savings.

I have used $.75-off coupons for Dole fresh pineapples several times, and just before the holidays, there were tons of coupons for Cuties Clementines. I’d stockpiled coupons, applying them when the clementines were marked down from $7.99 to $4.99. The most valuable coupon was for $.75, which my supermarket doubled to $1.50, and allowed me to buy five pounds of clementines for $3.49 or about $.69 a pound. Look for more coupons for Cuties Clementines in Sunday newspapers starting in February 2012.

So now that I’ve shared some of the ways that I’m able to extreme coupon for healthy food, how do you do it?

Leah Ingram is the founder of the Suddenly Frugal blog and the author of 14 books, including Suddenly Frugal: How to Live Happier and Healthier for Less (Adams Media, 2010) and Toss, Keep, Sell: The Suddenly Frugal Guide to Clearing Out Clutter and Cashing In (Adams Media, 2010). Leah appears regularly in frugal-living segments on the “10! Show” on NBC10 in Philadelphia and is a blogger for the NBC Universal website Home Goes Strong. Recently, Leah launched a new frugal venture called Philadelphia on the Cheap. This site focuses on deals, discounts, and freebies in the Philadelphia area—where she lives with her husband, two teenage daughters, and dog. Follow her on Twitter @suddenlyfrugal.