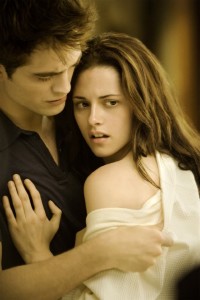 MOVIE SYNOPSIS: This fourth installment of The Twilight Saga finds vampire Edward Cullen finally marrying his human love Bella Swan and whisking her off to a secluded island for a romantic honeymoon. But the young bride soon finds herself pregnant with a fast-growing baby, which threatens both her and the baby’s life. Best friend, werewolf Jacob, is none too pleased with the chain of events, but vows to keep her safe.

Sex/Nudity: After a few passionate kisses, including one to seal the deal at their wedding, Edward and Bella go skinny-dipping on their honeymoon. We see Bella’s feet as she drops her towel on the beach, then a view of her and Edward’s bare backs and a glimpse of her breasts from the side as they embrace in the water. She’s nervous about losing her virginity and has to give herself a little pep talk in the bathroom. The main “sex scene” involves them in bed, with Edward on top of Bella, as he breaks the bed frame while lovemaking (apparently, vampires are notoriously passionate like that). The next day, they wake up in a sea of broken furniture, ripped bed linens and pillow feathers, and Bella is bruised from their night of lovemaking. Bella is seen in skimpy lingerie and bathing suits. Also, the wolf pack and their mates embrace and kiss on a beach.

Violence/Gore: Flashbacks show a young Edward biting and killing criminals. Bella has a nightmare which shows dead and bloodied bodies piled up by the Volturi. A few scenes show the wolves snarling and fighting each other, as well as fighting and chasing the vampires. After Bella gets pregnant, her health deteriorates and she looks frail and emaciated, but is strengthened by drinking blood out of a Styrofoam cup. Discussion of abortion and getting “rid of” the baby. The birth scene includes lots of pain, bones breaking, screaming, and blood. A scalpel is used to try and get the baby out, but Edward ends up biting through Bella’s uterus. To try and revive her, he jabs a giant syringe of his venom into her chest, then bites her on all of her pulse points. We see in-the-body shots of internal organs and blood.

Which Kids Will Like It? Kids 14 and older who like the stars of this film, romantic movies involving vampires and werewolves, or the other Twilight movies.

Will Parents Like It? Some of the dialogue and scenes are cheesy, but if you’ve seen the other movies or read the books, it’s almost a necessity to see this franchise through to the end.

MOVIE REVIEW: If you look back at the other Twilight movies, it’s pretty clear they’re not great works of film. There’s a reason why they’re the most parodied films in recent years. The acting isn’t consistent, the dialogue could use some help, and some of the scenes are downright cheesy.

That said, I still really like the Twilight  franchise. The story is romantic, I’ve come to know the characters and want to see how the story ends, and there’s something about a brooding vampire and a lovesick werewolf that makes for good film.

Directed by Bill Condon, Breaking Dawn picks up where Eclipse left off. Edward (Robert Pattinson) and Bella (Kristen Stewart) have struggled through various human and vampire issues, and at long last, they’re getting married. The woodsy wedding is brief but beautiful, with all of their friends and family present, including heartbroken werewolf Jacob (Taylor Lautner).

After a lavish reception, Edward whisks Bella off to a secluded island off the coast of Brazil (parts of it were shot in Brazil). Their honeymoon digs are gorgeous – a modern bungalow right on the beach, where they skinny dip and then have mad, bed-breaking sex. We know from the previous movie that she wants to be “turned,” but has decided to wait until after the honeymoon.

But surprise! She ends up pregnant with a half-human-half-vampire baby that practically kills her with its aggressive in-utero growth. Edward wants to terminate the pregnancy, but like any good mom, Bella refuses and wants to see it through. Apparently, she can’t be turned during the pregnancy, but there’s a chance it could save her right after giving birth.

Meanwhile, violence is brewing in the wolf pack, because the baby’s birth violates the treaty between the werewolves and the vampires. Vowing to protect Bella, Jacob severs ties with the pack, as alpha Sam decides the baby must die.

I practically laughed out loud during one scene where the wolves (as wolves) were “thinking” each others’ thoughts as they argue over what to do about Bella. It was like something you’d see on a dark and edgy Saturday morning cartoon. So yeah, some of the special effects are kind of hilarious, as is the parochial dialogue, like this line from Edward: “No measure of time with you will be long enough, but we’ll start with forever.”

There’s also a strong “fetus vs. baby” theme through the film. I don’t know… is it a pro-life debate if the baby is half-vampire (i.e. half-dead)? I’d like to see the courts debate that one! And, as with any film these days, we can’t forget the rampant product placement. Bella and Edward drive a Volvo, and everyone seems to have an Apple computer. They even manage to work in a shout-out to Tampax.

Still, even with all of Breaking Dawn’s faults, I still enjoyed it. We got our first glimpse of Reneesmee, both as a cute baby and in a flash-forward as a young girl (Mackenzie Foy). I’m looking forward to Breaking Dawn, Part 2, in theaters November 16, 2012. Maybe I’ll even read the books by then.