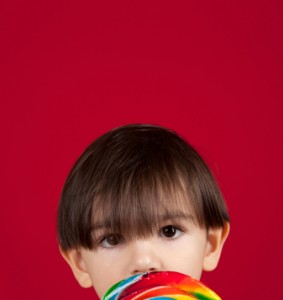 When I was three, my best friend Paula and I had chicken pox at the same time, thus giving us three days of playdates while we got over the virus. Nowadays though, you can just get your chicken pox in the mail atop the sweet taste of a lollipop.

I’d heard of chicken pox parties, where infected kids get together with healthy ones to spread the icky sickness and build immunity, thereby avoiding the chicken pox vaccine.

This one though, says Reuters, involves “a multi-state ring of parents, wary of vaccinations” sending lollipops licked by sick children and mailing them to healthy kids.

But the Licked-Lollipop-Sharathon isn’t just stupid; it’s dangerous and illegal.

MSNBC quoted a public information officer in Nashville who said that sending a virus or disease through the US mail or any private carrier like FedEx is illegal. (See: Anthrax). It’s also illegal to tamper with consumer products. (See: Tylenol, 1980’s).

The medical community is issuing stern warnings. One pediatric infectious disease specialist told The Daily News that spat-upon lollipops aren’t the most effective way to transmit chicken pox, but they could carry more dangerous viruses, like hepatitis. The Huffington Post adds group A strep and staph germs to the list of viruses that might survive the mail.

It gives a whole new meaning to “going viral.”

Think about it: You’re getting candy from strangers in the mail and telling your kids, “Here, eat this.” Because, you know, they’re from like-minded moms you found on the Facebook page, “Find a Pox Party in Your Area.”

I mean, there’s no chance that any of the moms in the group are psychopaths posing as moms. After all, it’s a secret group, and nobody ever friends anyone on Facebook just because a friend had friended “her” too. Right?

Chalk this one up to this week’s well-meaning parents doing stupid things story, and please remember that “Don’t put anything in your mouth if you don’t know where it’s been” is one of the Top 10 Rules of Parenting.

What do you think?

Posted in In the News | Tagged chicken pox, stupid parenting | Leave a response