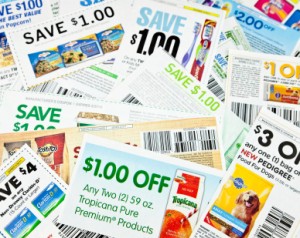 Extreme couponing has become one of our country’s biggest obsessions. It’s like “The Biggest Loser,” but instead of rooting for your favorite character to lose weight, when you watch TLC’s “Extreme Couponing,” you’re rooting for the shoppers to save the most money–assuming that are saving legitimately (as some have alleged coupon fraud).

When the show “Extreme Couponing” first came out, I was less than impressed. I even wrote about how extreme couponing could be hurting people’s self esteem.

Now that the second season of “Extreme Couponing” has started, I’ve noticed that the shoppers seem to be less extreme than on the first season, and many are using extreme couponing to help others.

So pardon me as I do a 180 on the TLC show “Extreme Couponing,” and share with you some of the lessons I’ve learned from watching the show:

Stockpiling has a place (within reason).
Every person that’s been featured on “Extreme Couponing” so far has a stockpile that could rival the local food pantry. While I haven’t gotten to the point where my supermarket shopping stash needs to take over the guest bedroom, I have learned that stocking up when something is priced well really does make sense.

All told I was able to make four trips to CVS, netting us 32 bottles of shampoo and conditioner that should last us 6 months. I spent less than $25 on six months’ worth of shampoo and conditioner, and in the process I saved $7. Better yet, I used a CVS Extra Care Bucks coupon for $3, which I’d printed out before my trip, so I was able to apply that $3 savings to my purchase.

Couponing isn’t just about the upfront savings.
I’ve also learned that back-end savings are often as valuable as the coupons you use during the upfront purchase.

During the back-to-school season, Procter and Gamble ran a special promising a $12 gift card if you bought a certain number of their designated products. The designated products were all, um, feminine hygiene products that we use anyway (see the earlier mention of three girls in the house). Of course, I used coupons to save on the Always pads and Tampax Pearl upfront, but after filling out a form and mailing it in, I got a $12 gift card in the mail, which I can use the next time I need to food shop–or buy anything else, for that matter.

I’ve also received gift card rebates when I purchased paper at Staples, knocking down the cost of a ream of paper down to one cent. Currently, I have about $50 in rebate gift cards in my wallet.

I look everywhere for coupons now and ways to save.
I always scan my frequent shopper card whenever I go into a store. Especially in places like CVS, which give you coupons on a regular basis, this is a must. Also, I invested in one of those CVS Green Bag Tags awhile ago, and it has more than earned back the initial $.99 investment. Additionally, I “Like” products on Facebook so I can get coupons, and follow my favorite brands on Twitter so I can find out about offers for coupons.

I’ve also added “Hot Deals” and “Frugal Coupons” to Suddenly Frugal. This is an affiliate program that allows me to earn money if you print coupons from my site but also gives me the chance, once, to print a coupon to save money as well. (I just scored $3 off 10 Weight Watchers Smart Ones entrees; the best coupon I’ve ever seen for that product before was $1 off for 10.) I’m also following other frugal bloggers to get a heads-up on coupons (Hip2Save and The Krazy Coupon Lady are two that come to mind). And I always make sure to print coupons from online sites, cut them out of women’s magazines, and, of course, get them from the Sunday paper.

Scouring supermarket circulars is a must.
Before I went food shopping last Sunday, I kept three circulars in front of me from the grocery store where I normally shop, the smaller supermarket where I’ll sometimes shop if the price is right, and CVS. As I made my list and my meal plan for the week, based on what was on sale and which products for which I had coupons, I also noted what the prices were for certain items at each of the stores (if it was listed in the circular). This way if I was unsure if I should buy the product at grocery store A or wait to see if grocery store B had a better price, I could see that price right on my list. This was how I came to buy nearly everything on my list at the regular grocery store, but saved certain purchases for the smaller supermarket:

I must be doing something right. The other night my daughter Jane said to me, “How is it that you’re not on ‘Extreme Couponing’?” Well, maybe someday I’ll audition for that show, though I don’t think a stockpile of 32 bottles of shampoo and conditioner only will cut it. However, along the way I have learned new and creative ways–and legitimate ways–to save my family money without taking couponing to the extreme.

Leah Ingram is the founder of the Suddenly Frugal blog and the author of 14 books, including Suddenly Frugal: How to Live Happier and Healthier for Less (Adams Media, 2010) and Toss, Keep, Sell: The Suddenly Frugal Guide to Clearing Out Clutter and Cashing In (Adams Media, 2010). Leah appears regularly in frugal-living segments on the “10! Show” on NBC10 in Philadelphia and is a blogger for the NBC Universal website Home Goes Strong. Recently, Leah launched a new frugal venture called Philadelphia on the Cheap. This site focuses on deals, discounts, and freebies in the Philadelphia area—where she lives with her husband, two teenage daughters, and dog. Follow her on Twitter @suddenlyfrugal