OFF MY NOODLE: Generations of Women Lying About Their Age 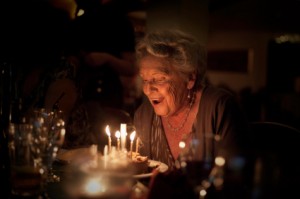 I come from a long line of women who lied about their ages.  When I was 16, my grandmother admitted in a hushed tone that she had been “only 22″ when she married. “Too young,” she warned me with a sigh, though I don’t know why it was too young, as she and my grandfather were happily married for 50 years. In reality, Nana had married at 23, but was too embarrassed at her “old maid” status to confess it.

Years later, on the day when my Aunt Eleanor passed away from cancer, her grief-stricken husband said in disbelief, “She was only 53!” My mother and I exchanged horrified looks. We knew that Eleanor was 55 – a fact she had coyly kept from her husband and taken literally to her grave.

My Nana and Aunt Eleanor weren’t the only ones to fudge the numbers.  My paternal grandmother lied about her age, with disastrous results. When my grandfather learned that she had been lying to him about her age for more than 20 years, and was in fact several years his senior, he divorced her. I took this lesson to heart, so when I met my future husband, I let him know on the first date that I was 15 months his senior and that if my seniority was going to present a problem, I wanted to know now. That was 25 years ago, and fortunately, it hasn’t caused a problem yet.

On one hand, I find all the “fuzzy math” practiced by my grandmothers and aunt amusing. Why bother shaving off only one paltry year, as my Nana did? Or even two years, as my Aunt Eleanor did? (I have no idea how many years my other grandmother nicked off when she lied about her age, but based on family lore, I have a hunch that it may have been close to a decade!) On the other hand, as women they had very real fears that owning up to their ages would have kept them from the altar.

Youth, especially in women, has always been prized. Today’s obsession with being young or at least looking young has made people even in their 40’s and 50’s worry about whether they might be considered “too old” for jobs in certain industries. One woman I know, not even 40, deleted the year of her college graduation from her resume, certain it would work against her in job interviews. A popular women’s magazine whose stated purpose is to celebrate the vitality and boldness of women over 40 air brushes all signs of aging off their cover celebrities. None of these “bold,” 40-plus women is allowed to look a day over 30 – if that.

Although I’ve never shied from revealing my age, signs of my own aging dismay me, too.  The fact that I can no longer twist myself into the impossibly elastic positions during Pilates class that I used to be able to do with ease is something only my instructor and I need to know. But that tell-tale loss of collagen and the inexorable pull of gravity on the rest of me? I’d need a hefty cosmetic surgery budget to hide that, so I content myself with “home improvement” hair coloring jobs and dabble in anti-aging moisturizing experiments. Many of these products have aggressive names, such as “Collagen Force Extra,” which sounds to me like the name of an invasion plan for the U.S. Marines.

Still, there’s a lot to be said for growing older. For one, it sure beats the alternative.  Second, I like the confidence that is the gift of experience, and the serenity that life’s dumbest mistakes are behind me (at least, I’m fairly sure). I’m comforted that while I’ve suffered painful losses, I believe there is a purpose for everything, even when it’s beyond my understanding, and the next time I face a loss, my faith will see me through.

It’s also exciting to live in a time when so many people live vital, productive and meaningful lives well into their 80s and 90s.  Historian Jacques Barzun published a 900-page book, From Dawn to Decadence, in 2001, when he was 93. (He recently celebrated his centennial birthday.) And as a humor writer, I’m delighted at how many humorists have been blessed to live to very ripe ages: George Burns made it to 100; Phyllis Diller is still cracking jokes at 90; Art Buchwald was sent to a hospice to die at age 80, but didn’t, so he did what came naturally: he wrote a funny book about it, and passed away at 81.

Of course we all know that laughter is good for the body and the soul — “inner jogging,” as Norman Cousins called it.  So I’m not going to even bother trying to lie about my age. I’d rather keep laughing, even if the laugh lines on my face will probably clue you in that I’m . . . take a guess!

Posted in Off My Noodle | Tagged aging, lie about age | Leave a response