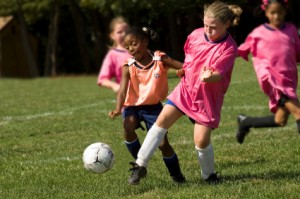 I felt like this, until I took a nose-dive. Then I felt old.

I could taste metal in my mouth. Either I wasn’t completely done with bronchitis or my dinner at Ruby Tuesdays had been cooked in pennies. Either way, perhaps I should have subbed myself out of the soccer game last night.

“So you were out with an injury?” asked one of my teammates, who were all wearing hot pink shirts emblazoned with the name of the soccer team I just joined: “Danger.”

“I was out with cancer,” I answered simply. I didn’t want to go into the litany of post-cancer issues that had kept me from a glorious and sustainable return to the soccer field for four years, from a chronic pain in my chest where a six-inch tumor had been, to, most recently, six weeks of bronchitis, which, frankly, isn’t quite over yet. Besides, Momma is rusty.

When I was offered a chance to sub into the game, I suggested that the other players on the bench go first, mumbling something about not officially starting with the team until next week. Really though, I was waiting for the feeling to return to my feet.

Before cancer, I barely noticed when my shin guard straps were hooked around my soles. Last night, however, I imagined complaining to my oncologist, “The neuropathy comes back when I strap on shin guards,” while he rolled his eyes. In cancer circles, that doesn’t even qualify as a problem.

When I finally subbed in, luckily at center defense, my position back in my college days, I actually did pretty okay — at the start. My first touch on the ball was a header. The next, a decent pass following by a blocked shot. It was all coming back to me. Yeah, I belonged on that field, on that team. Maybe I wasn’t so rusty after all.

And then it went downhill from there.

When I subbed back out, I could taste it: the metallic essence of bronchitis being shaken up inside me like a snow globe. I coughed up something that felt like a tadpole. I had to tap at my feet to keep them from numbing up on me, and it felt like I had the imprint of the soccer ball on my forehead. I looked at the clock: We still had 25 minutes left in this game.

When I subbed back in, this time at left defense, I could hear my goalie’s impassioned pleas: “Who’s on left? Who’s playing here?”

Um, that would be me.

And there’s me playing too far up.

And there’s me taking on a forward who is in way better shape and way faster than I am.

And there’s me trying to chase her down as she barrels past me.

And there’s me tripping over my own left foot and diving, nose-first, butt in the air, into the turf, where hundreds of little round, black thingies made of God-knows-what chemical fly into the air, some of them landing squarely in my mouth. It was the kind of fabulous flub that my college soccer pals would have commemorated with a photo of me glued to a potted something-or-other from CVS.

“It’s a face-plant. Get it?” they’d say, laughing. And then I’d receive one every year on my birthday.

Luckily, the other team didn’t score off my mistake. Also, I stopped tasting metal and started tasting God-knows-what chemical.

After that, I hung back far enough that I wouldn’t have to attempt to sprint after the other team on a breakaway. I had a few more less-than-spectacular plays, and then I was subbed out again. When I came back in with minutes left in the game, I found myself playing forward, in the wonderful world of offense, where mistakes — like my sad, puttering shot on goal — aren’t really mistakes, but opportunities for other people to shout, “Nice try!”

If I’d done that on defense, there would be groans, and perhaps, a shot on our goal, followed by a well-earned chastising from our goalie and dirty looks from the rest of the team. On defense, you’re not allowed to make mistakes. On offense? Mistakes are “good ideas.”

In the end, we lost 2-0. I’m not sure how much of that loss could be attributed to me, but I do know that on my way out the door, our goalie offered a cheerful, “See you next week!”

Posted in Days Like This | Tagged soccer moms | Leave a response