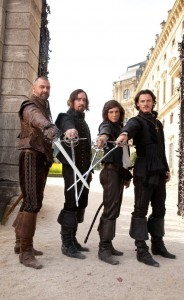 SYNOPSIS: Alexandre Dumas’ classic tale gets a remake with Logan Lerman playing D’Artagnan, the hot-headed young man who pairs up with three once legendary Musketeers. Their goal: to stop a beautiful double agent and her villainous employer from seizing the French throne and engulfing Europe in war.

Sex/Nudity: Some flirting and a few kisses. Lots of cleavage popping out of period dresses.

Violence/Gore: Rampant swashbuckling, sword-fighting, and musket battles result in a few dead characters, but there’s no blood. A main character appears to fall to her death. A character is shot at close range, and a villain dies from a sword wound. Two air ships battle with cannons, and crew members fight with hand-to-hand combat.

Drugs/Alcohol: The Musketeers drink in their leisure time, sometimes to excess.

Which Kids Will Like It? Kids 12 and older who like action adventure movies with lots of sword-fighting scenes.

Will Parents Like It? Despite the fact that it’s based on a classic tale, this just isn’t a great movie.

REVIEW: The Three Musketeers is one of those movies that sounds good in concept. Take a classic tale by Alexandre Dumas and add in a terrific cast, magnificent costumes, well-choreographed fight scenes, a bit of romance, and cool special effects. And yet, there’s something missing. The movie never really goes that extra mile to get us invested in the characters and care about what happens to them.

The story begins with penniless young D’Artagnan (Logan Lerman, who was so wonderful in 3:10 to Yuma) leaving his parents in the country and traveling to Paris to find the Musketeers: brawny Porthos (Ray Stevenson), philosophical Aramis (Luke Evans) and angry Athos (Matthew Macfadyen).

The once legendary warriors are now down on their luck and wanted by the scheming Cardinal Richelieu (Christoph Waltz), who enlists manipulative mercenary Milady de Winter (Milla Jovovich) to convince King Louis XIII (Freddie Fox) that Queen Anne (Juno Temple) is cheating on him with Duke Buckingham (Orlando Bloom). The ultimate goal is to make the young French monarch declare war on England, but the Musketeers and D’Artagnan discover the plot and attempt to stop the Cardinal from succeeding.

I feel a little sorry for all the great actors in this film, because you have to wonder if part-way through the movie, they started thinking, “Hmm, this just isn’t working, but I’m in too far now and have to see it through.” On the other hand, there’s nothing surprising about the cast choices. I feel like the filmmakers just plugged in people who could do these roles in their sleep. Handsome and noble young guy? Logan Lerman. Dashing swordsman? Orlando Bloom. Adventurous female? Milla Jovovich. Scheming villains? Christoph Waltz and Mads Mikkelsen.

That’s not to say The Three Musketeers is a complete and utter flop. There’s the “All for One and One for All” philosophy. I loved all the costumes, settings, and special effects. And one of the best things about this movie is the air ships — cool vessels that look like seafaring ships but float through the air via a balloon sail. These ships pave the way for some fun stunts involving sword-fighting, cannons firing, people leaping from one ship to another, that sort of thing.

But when it comes right down to it, what The Three Musketeers is missing is heart. For a classic adventure that could have been fun and romantic, you’ll probably leave the theater and forget all about this movie. Let’s just hope they don’t take the made-for-a-sequel ending and actually make a sequel. Or if they go down that path, do a Spider-Man and start from scratch.

Jane Boursaw is a family entertainment writer specializing in movies and TV. Syndicate her family movie & TV reviews in your publication; visit her at ReelLifeWithJane; follow her on Twitter; become a friend on Facebook; email jboursaw@charter.net.