I thought I might burst my spleen, except, I’m not really sure where my spleen is located. I just knew that if I yelled and jumped much longer, I might cause damage to a small, but useful bodily organ. And then someone else would have to keep track of the subs.

My soccer team, the U-13 boys’ team that I help coach, was playing one of the top teams in the state and somehow, we weren’t getting crushed. Rather, we were tied 2-2 with minutes left in the State Cup game on Saturday.

The other coaches and I were tripping over each other and our bench of substitute players to tell the defense to cover #8 or shout at the offense to GOOOOOOOO! It seems we had a shot at beating the other team, a team that practices twice as much as we do and recruits players from around the state. Our team, on the other hand, is made up of local kids who are growing up together, kids who also play other sports, kids who have sleepovers at each other’s houses.

We were David and they were Goliath, and the game was tied.

I started rubbing my back where the pain from repeatedly shouting PULL UP DEFENSE! had manifested itself. The spleen is in the front, right? I thought. A kidney. I’m gonna blow a kidney.

And that’s when the oh s–t moment happened: My center defender, who also happens to be my son, was ejected from the game for a foul that looked more to me like boys tripping over other’s feet. As he skulked off the field, I told him it wasn’t his fault, and then the kids on the bench tried to cheer him up. I turned around, because I couldn’t watch the penalty kick that the other team was about to take on our goalie, who was standing in mud. I heard a punt and a whoosh!

I could tell from the silence on our bench that the other team had scored. We were down a goal and a player.

Definitely a kidney. I thought.

We kept on cheering and yelling and hoping and just when we thought there was no chance…there was a breakaway. With seconds left in the game, our star forward had stolen the ball and was racing two of their defenders to the goal. Their goalie came out, and our kid flipped it up and over his head — and into the goal.

We all went nuts. Jumping and screaming and high-fiving and hugging and oh-my-God-did-you-see-that?

Maybe my bladder, too.

Seconds later, the ref blew the whistle to signal the end of regular play. We were still in the game, even if my son wasn’t. His red card would keep out for the rest of that game and the next one — yesterday, on his birthday.

We played two 10-minute overtimes, but were still tied, so the game went to penalty kicks. I prepared my spleen or kidneys or whatever, but alas, we didn’t win. Sad faces all around, despite the pep talks and pats on the back. But they put up a heck of a fight.

I need a heating pad. And a drink.

The next day, we won our game 6-1 in an anti-climactic tussle where my spleen was plenty safe from exploding and my son looked bored on the bench. After the game, we celebrated his 13th birthday with very special cupcakes: 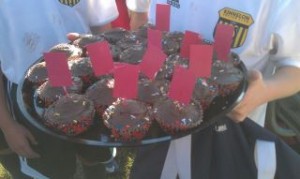 My spleen has a few days to rest until the next game.

Posted in Boys will be boys, Days Like This | Tagged soccer, soccer coach | Leave a response