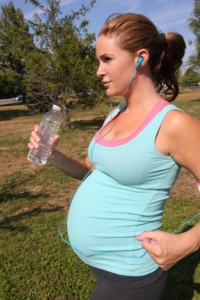 When I asked my husband why he likes to run marathons, he said, “Well, it’s like you have so much joy and so much pain at the same time. You wouldn’t understand.”

Amber Miller understands. She ran a marathon and gave birth in the same day. On Sunday, she ran the Chicago Marathon at 39-weeks pregnant, and crossed the finish line with labor pains. Seven hours later, reports the Chicago Sun-Times, she gave birth to a healthy daughter.

So, running 26.2 miles while 39-weeks pregnant is easier than giving birth. Oh the pain and the joy and the in-your-face Hubby!

I can’t really relate, though, because I hate running unless there’s a ball involved. If there’s a ball, I’m thinking, I have to kick that!  or I have to hit that back over the net! With no ball, however, I just think, When can I stop running, because this is so boring that I’d rather be giving birth.

After running the race in 6 1/2 hours (three hours off her usual pace) and then giving birth, she said, “I don’t feel tired.”

Knock it off, Amber Miller. You’re ruining it for the rest of us.

What do you think? Amazing accomplishment or dangerous idea?